You may have noticed that I love dressing up for a themed party. I even made a resolution to throw my own themed party, and I started trying to figure out Pinterest to scour for ideas for theme that seemed too obvious not to do.

So for my upcoming 25th birthday, I decided to throw a galactic star(r) party! And finally put my previously-useless skill of finding star things to good use! It did seem a bit self-indulgent to have a star party but spoiler alert: I am a little sick of stars now, so we will all be seeing just a bit fewer of them in my life.

An initial challenge was picking the date. Because I have a December birthday so close to the holidays, my party would have to compete with holiday parties and festivities all over the place. I also tried to take into consideration that two of my friends who were key in helping me pull the party together may need to help another friend with his birthday party. I picked the first weekend of December to try to play it as safe as possible with regards to conflict.

Once I had the date, it was just a matter of slowly accumulating things I wanted to have at the party. As a girl named Starr, I have seen and been shown a lot of starry, space-themed, galactic things. Little by little, I started collecting pieces that I wanted to showcase.

Make no mistake: even though I love logistics, this was stressful to plan. I was really unsure of how much food to get, because I wasn’t planning on serving enough to be dinner, but I didn’t want people to be hungry. I wasn’t serving alcohol because I don’t drink, but I haven’t been to a dry adult party… ever…?

I got 2 cakes in case there wasn’t enough. (Spoiler alert: I had way too much cake. Not only did we not touch the 2nd cake, we got through way less than half of the first one. Maybe the biggest mistake of the entire party was ordering that second cake.) A big part of my decoration initially was candy, so then I got to worrying about how many sweets I had. (A lot. It was a lot of sweets.)

I got my first-ever salon manicure in preparation for this, and that was a strange ordeal because the nail tech really wanted to fulfill a vision of different colors with different glitters on all my nails! I was only able to put my foot down so much but I think it still turned out lovely, despite the orange (gr…) and pink glitter bits. She was so convinced that it was a cute polish and she wasn’t wrong. I just wanted… only silver glitter. I lost that battle but I won the war.

I also spent the days leading up the party in a mad panic trying to get the finishing touches and getting express shipping for things that I almost forgot about. Oops. I originally planned to get my hair blown out so I’d have one less unruly thing to worry about, but things don’t always work out the way you plan. There was also the incident where Ben and I spent over an hour searching for an item I could’ve sworn was on the dining table only to later discover it still in the mailbox.

What really came through for the aesthetic of the party was the lights. As nice as the little pieces of decor I had looked, with how large the room was, what really pulled the entire thing together was the 30 strands of fairy lights that I was able to borrow. 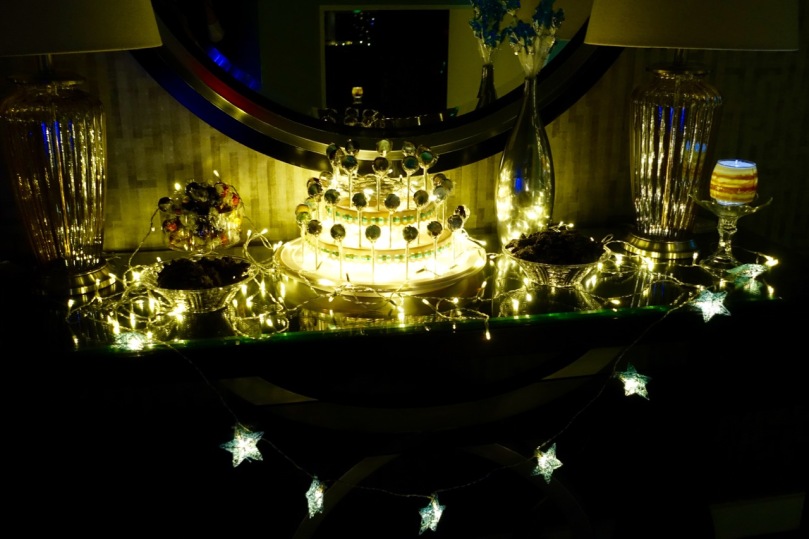 Another key show-stopper was my stunning galaxy mirror cake. 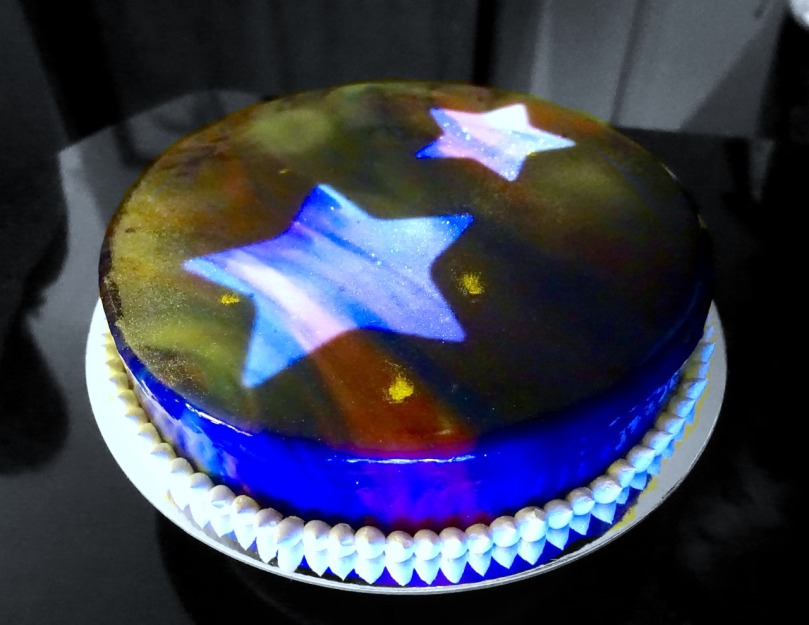 A thousand thank yous to Lavande Patisserie and their pastry chef, Chef Andrew for making my dream cake. My friends wanted to do a grand reveal of the cake to me, and I was blown away. It looked even better than I expected!!! 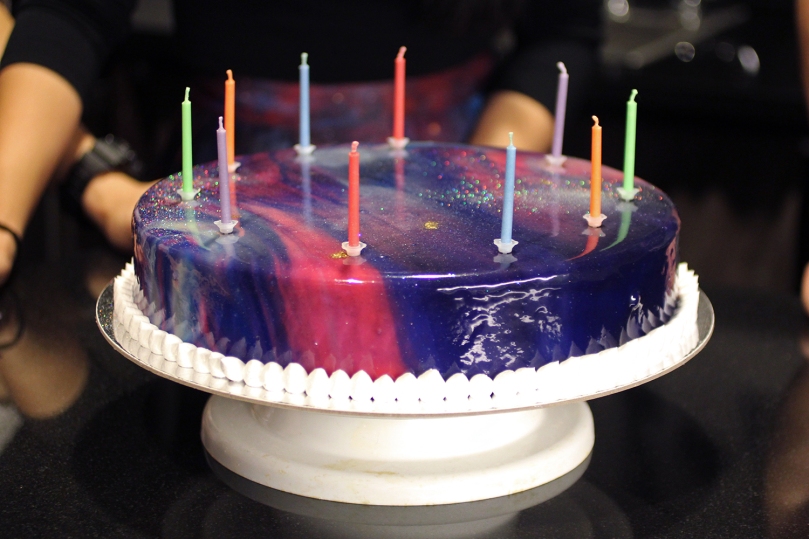 My only regret is that I ordered 2 cakes out of fear that there wouldn’t be enough. As it turns out, people were pretty full and couldn’t even eat 1/3 of the first cake. So… we brought back a LOT of cake…

Oh yeah, and I wore ThinkGeek’s incredible twinkling lights skirt! It was a lot of work to string the lights through it, but I think the result was well worth it. 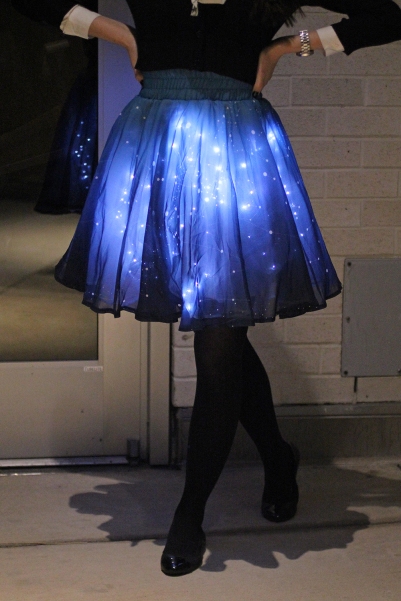 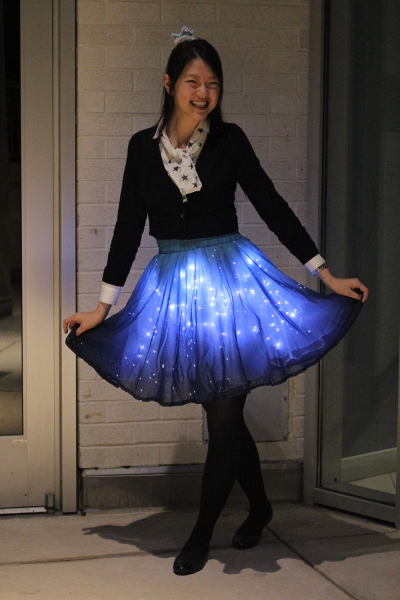 I am also eternally grateful to my friends who helped me put together the party. Annie, who is a party professional, was invaluable to me, as was Tim, who put together the amazing photobooth. 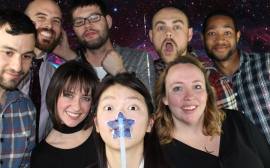 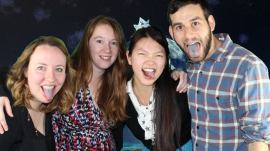 I wish I had taken more photos of the event, because there were so many starry details that I put together for it. Different lights, different decals, there was an origami lucky star station. The games, the gifts, the wonderful themed outfits my friends wore.

I will have to just cherish all of that in my memory, and I hope my friends will, too.

I’m so grateful that I was able to pull this party off. The best feeling was looking around at all the friends that I’ve made. I have been reflecting a lot on what kind of friendships I have and what kind of friend I am over the past few years, so I am always amazed and appreciative of the friends who choose to spend their time with me.

Thank you to all of my friends who joined me to celebrate stars and space! I had a stellar time and hope you did, too.