Thanks to The City Vault for sending me to this early screening!

Note: I have not read the The Dark Tower book series, nor have I seen… any Stephen King movie? Or read any of his books? (Horror is not my thing. I am a scaredy cat.) 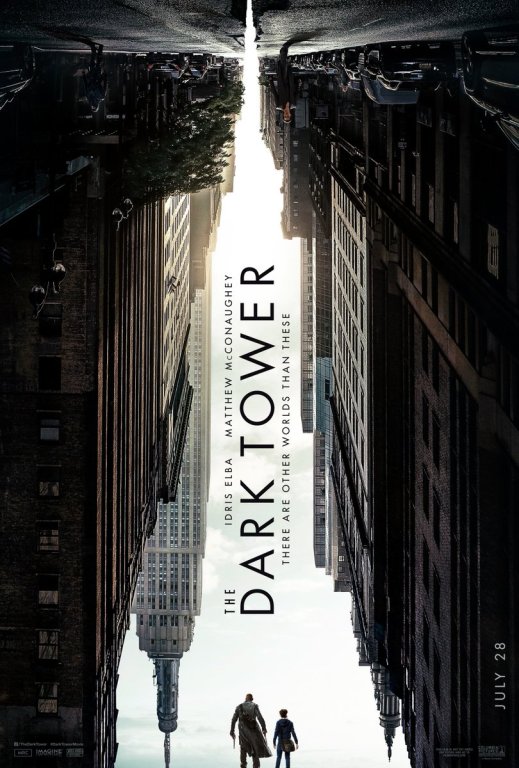 There has been SO MUCH HYPE for this much-beloved epic book series to come to life on the big screen, but there has also been so much strife for this film to actually come to fruition. Stephen King fans have been waiting with bated breath for a movie that they knew could never match the fantastical world crafted over nine books that is the link between all of King’s other novels.

To put it in perspective for people unfamiliar with the source material: You know how there are theories that say things like all Pixar movies are in the same universe? That’s what The Dark Tower is to Stephen King novels, on a Lord of the Rings-esque scale. So… it’s a big a** deal.

The man in black fled across the desert, and the gunslinger followed.

I learned that The Dark Tower movie is meant to be a sequel/continuation of the books, so fans who are expecting a faithful adaptation of the Gunslinger book will be disappointed. There is no man in black fleeing across the desert to open the movie; that war is done when the film begins.

The Gunslinger (Idris Elba) is the standout star of this film. He channels so much of that Man With No Name energy that Stephen King based the character on with this immense gravitas in his eyes and his voice and his posture. And while it’s obvious, it is very worth mentioning how freaking cool he is with his forged-from-Excalibur guns.

I’m sure the books have a lot more backstory on Roland, the last of the Gunslingers, but we don’t really know what his deal is in the movie. Why is he the last? What do you mean guns forged from King Arthur’s Excalibur? Why is he able to resist the Man in Black’s magics, and why is this not a bigger mystery to either of them?

Speaking of the Man in Black, Matthew McConaughey plays the villain I never knew I wanted him to be all these years of watching his career grow from the rom-coms I loved him in to an Oscar-winning actor. He has this eerie stillness to him, a complete control of the situation, and a psychopathic way of getting in people’s heads while having zero empathy for them.

Despite all of that, the Man in Black in The Dark Tower falls victim to the same fate as many blockbuster movie villains: A poorly fleshed out motive and a, there, uncompelling foil to our protagonists. Walter (as his real name is, apparently) is this all-powerful man with at least hundreds of minions at his fingertips. He has magic that allows hims to stop bullets and tell people to stop breathing and do some straight-up Matrix-type stuff. But why? Why does he want the Dark Tower to fall? Why does he want to allow hellish creatures into the universe? And my personal beef when it comes to magical powers is always: What is the limit of these powers? (Still mad about Elsa’s vague but frighteningly limitless ice powers…)

Tom Taylor‘s Jake Chambers showed a lot of very real emotions for the anchor of this story: he’s frustrated that no one is taking his dreams seriously, he’s mad at his stepfather for wanting to send him away to get help, he’s terrified of the monsters in his dreams coming after him in real life, he’s disappointed that even the heroes of his dreams aren’t what he expected, he’s sad about having lost his father.

Unfortunately, with Jake, we are literally only TOLD that he has great powers, but we really aren’t shown this. Before he crosses through a portal, he has to fight off some kind of demon in the woodwork of the house and, apparently, the reason he is able to do so is because he has mega-strong psychic abilities? But we see no real indication of this until we’re told that he has these powers. It’s not like Harry Potter talking to a snake or Anakin Skywalker using the Force to win a race. We really don’t get an inkling here, and it’s a rather big failure to show, not tell by the movie, since it is the reason that Jake is important as a character in the context of the events of this story!

TL;DR The movie falls short of the epic potential it promises, and does some strange and unnecessary showing without telling. (Indicative of some strange editing decisions, maybe?) It also leans a bit too much on the fish-out-of-water humor to get by. It’s still a good time to watch, but I don’t feel compelled to watch a sequel or even the potential TV show to come based on this film.

But it is a lot of fun to watch Idris Elba and his revolvers.

The Dark Tower is in theaters today. Spoilers below the trailer.

First of all, shout-out to Claudia Kim for landing random roles in Avengers: Age of Ultron and now in The Dark Tower.

Second, there are just so many things that get said in this movie that are then not explained, like:

I do not aim with my hand; he who aims with his hand has forgotten the face of his father. I aim with my eye.

I do not kill with my gun; he who kills with his gun has forgotten the face of his father. I kill with my heart.

I think they throw around terms without context like “shine” and “Excalibur” because they think there will be more movies and/or a TV show but that is laziness. A movie should stand alone and not leave me with so many questions. This is with me not even questioning what the heck is up with this tower and why there are monsters already out there with the tower intact, and if evil and darkness will come spilling forward with the tower gone then how are you explaining the antagonists of the movie? I don’t know what’s going on you guys.

Third: get out of here with that unnecessary romance baloney!!! There is a point in the movie where Jake is making eyes at a nice young lady and then later helps her while she’s trying to help her sheep. BOY WHY. I don’t want to talk about this anymore, I hate these unnecessary romances, I don’t know why we even bother anymore.

I don’t want to get too worked up about that last point but the movie is fun. It’s just… a bit of a letdown, considering the hype for the movie and the hype around the source material. What did you think?