Last time on SF 2016, I woke up with the sunrise after taking a little 2-hour post-clubbing nap to meet Christine for breakfast! Then we enjoyed a really leisurely, gorgeous stroll through the Palace of Fine Arts and Crissy Field. After enjoying the scenery for a bit, it was time for a little pick-me-up!

After basking in sunshine, sea air, and people+doggy-watching, I felt my 2.5 hours of sleep catch up to me and was slammed with a wall of exhaustion. It was time for my first San Francisco cup of coffee!

Christine and I had passed several very educational signs at Chrissy Field, one of which was describing the snowy plover, a very cute little bird. It is also the name of a trendy coffee beverage at Andytown Coffee Roasters (review), which turned out to be a really refreshing drink at exactly the kind of coffee shop I expected to visit in San Francisco.

At Andytown, Ben joined us to perk up himself and to join us for lunch at San Tung for some delicious Chinese food. Unfortunately, Christine and I were still pretty stuffed from breakfast and Ben was too sleepy to feel hungry. But the food was really delicious.

From there, it was time for us to work off all that food with the Lands End Hike. We started at the Sutro Baths, or more accurately the ruins of the baths. 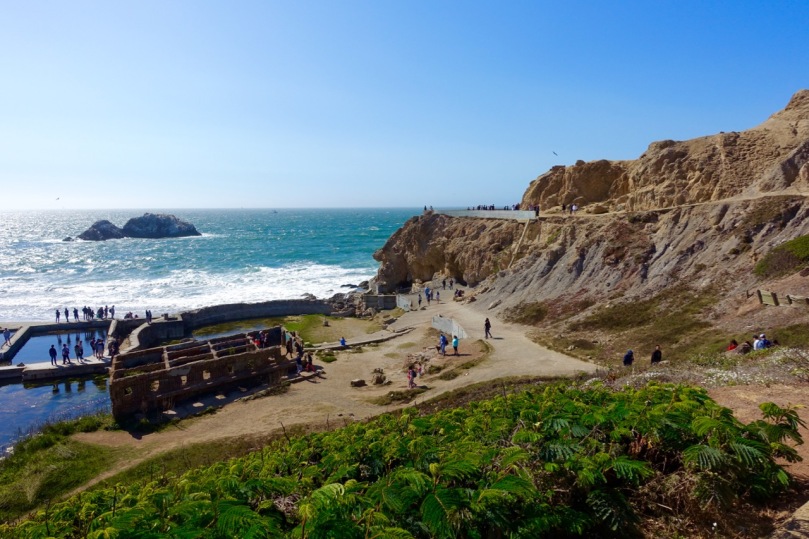 It was a beautiful, beautiful hike. A bit strenuous for sure (and all the more difficult holding our leftovers from lunch) but it was really lovely to see the views and to breathe the fresh air. This whole day was really invigorating and I was so happy to spend it with Christine and Ben.

The timing fairies were in our favor and, by skipping the Lands End Labyrinth, we were able to finish the hike in time to get Ben over to Japantown to meet back up with his friends for dinner. In fact, we were a bit early, so we browsed around Daiso (which we don’t have on the East Coast) and a little shopping center before splitting up for dinner.

I was still feeling very out of it from the lack of sleep, the hike, the abundance of food, and maybe even from the caffeine since I don’t drink a lot of caffeine at all, so I was having a hard time deciding where to eat. We finally decided on Shabuzen, where we nommed on a delicious shabu-shabu meal together. It was bittersweet for me because, with Christine headed to San Jose to see her bestie, it meant that our magical day together was coming to a close. I felt especially bad/sad about it because I was so out of it at this point in the day and was being a bit of a drag, to be super honest. (Man, 1000 props to Christine for putting up with how indecisive I was about what to eat for dinner.) (And to Ben, who puts up with that on a too-regular basis.) 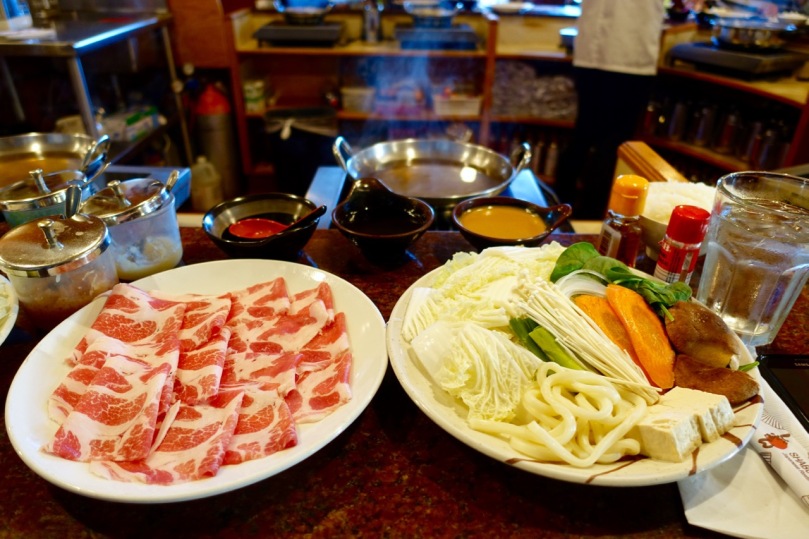 We said our goodbyes, and I still had some time before Ben’s group wrapped up at Korean BBQ, so I walked around the closing shops that we had browsed together just a little while earlier. My first walk-through, I felt sensory overload by all the things and prices and wowowowow factor, but with the shops emptying out and the sky getting darker, I was finally able to re-center and re-focus on the present and feel just a little less dead. I also got to try out this fun liquid nitrogen dessert from Chocolate Chair that was like a giant Cap’n Crunch Crunchberry (sorta) that let you breathe out dragon’s breath when you ate it. Very drying but super fun to play around with once you get used to it!

And then our group ended the evening with karaoke because of course we did! My favorite thing! Even though I was really struggling at this point — 2.5 hours of sleep and it being about 4AM Eastern time when we finished — I still had a lot of fun at karaoke. A highlight was hearing one of Ben’s friends do a Tupac song, because I don’t know him too well and no one has ever heard him rap before, let alone go through an entire Tupac Shakur song! It was a beautiful moment, I will treasure it forever, along with the time that me and another person simultaneously put “Careless Whisper” (aka the sexy sax song) on the karaoke queue. (It literally came up twice in a row because we both entered it around the same time. It was destiny.) (Also, we wound up forgetting our leftovers at karaoke. After I forgot to hand them back to Christine. After carrying them around for our entire hike. Womp womp, that was an epic fail.)

Our last full day in San Francisco finally came to a close, and honestly, I had a really amazing time. I only started fading around dinner, but the energy of the Bay really kept me going. We had so many amazing Lyft and Uber drivers throughout the day. The weather was absolutely perfect.

It was going to be hard to say goodbye to this wonderful weekend.

Did we miss any major sights while we were in San Francisco?
What are your favorite Japantown eats?
And what’s the last super-hyped food you tried? Was it worth it? The dragon’s breath dessert was… just okay. Really drying, not particularly tasty, and the effect of the liquid nitrogen doesn’t last very long. But it’s fun to try once and to split it with a bunch of friends!

Last time on SF 2016, we had a Big Night Out with Ben’s college friends that began with a fancy steakhouse dinner and ended with clubbing. And then actually ended with taking care of folks who had a bit too much to drink. I was finally able to go to sleep at 3:30AM… Pacific time…, which really made my 5AM alarm feel extra special.

I wasn’t even mad when my alarm rang Sunday morning because it was my big day with Christine! You may remember that she visited me last year for her first-ever trip to the East Coast and our first-ever in-person meeting. (#blogfriendsarerealfriends) I was so excited to finally revisit San Francisco primarily because it meant I could see Christine, who had graciously turned down many awesome Labor Day weekend plans to spend time with me.

Also, one of the best things about Christine is that she basically planned our whole day! Oh man, I was in heaven. It felt so nice to be on a vacation and to not have planned it. Plus, I trust Christine’s judgment with her home city and the best things to see, do, and eat!

(As for the title of this post: Christine’s initials are my initials reversed! Fate!)

Her first item on our itinerary was breakfast at Mama’s on Washington Square. Mama’s is a tiny restaurant that only seats about 30 people and opens at 8AM. So Christine and I agreed to start lining up at 6AM. Yep, you read that right. I got in a Lyft with the license plate “PHARAOH” and found Christine already waiting at Mama’s.

She was 2nd in line.

The food was good but if you see a line as long as it was, don’t feel bad about skipping it. We got the famed Monte Cristo sandwich and the bay shrimp Benedict we saw on the specials menu. (Also, it is cash or debit only; no credit cards.) It was a very cute restaurant and it felt cozy, almost like someone’s personal dining room rather than a restaurant with hungry diners all staring in through the windows at you, willing you to eat faster and shut up so they could get their breakfast on.

My other photos are a bit awful but this one is great because Christine is in it!

I finally have my own signature Christine at a restaurant photo!

The Monte Cristo was so good that I forgot to put jam on most of it oops. The jam does make it better though!

Bay shrimp Benedict… with a focus on the home fries, my least favorite breakfast potato…

After Mama’s, we did a quick little stroll around Washington Square, where we saw a lot of middle-aged Chinese ladies doing… something… Seemed like some kind of choreographed exercise, with one lady shouting when to do the next move, but the women were standing so far from each other, spread all over the park. However you get your blood pumping! 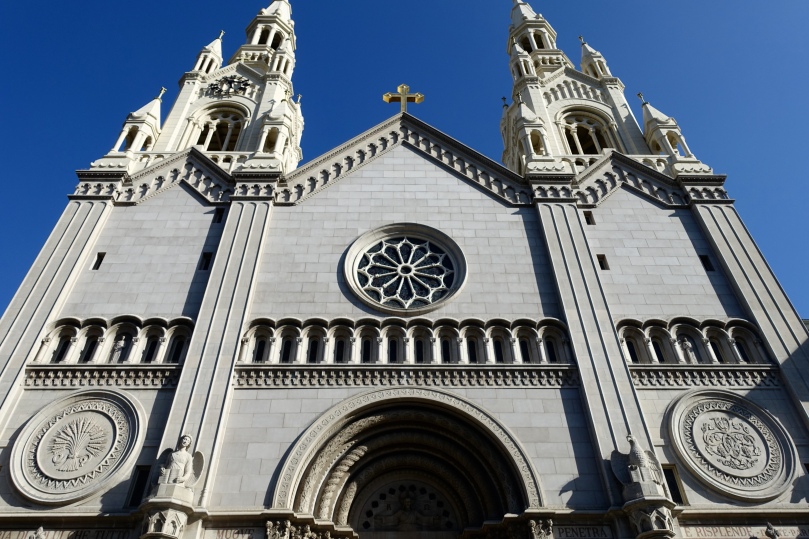 From there, we went to the Palace of Fine Arts, a gorgeous Greco-Roman-inspired structure that was originally built for the 1915 Panama-Pacific Expo. Today, its theater is still in use and it is a popular location for weddings and photo shoots for very good reason. Just look at it. It was built to be looked at. 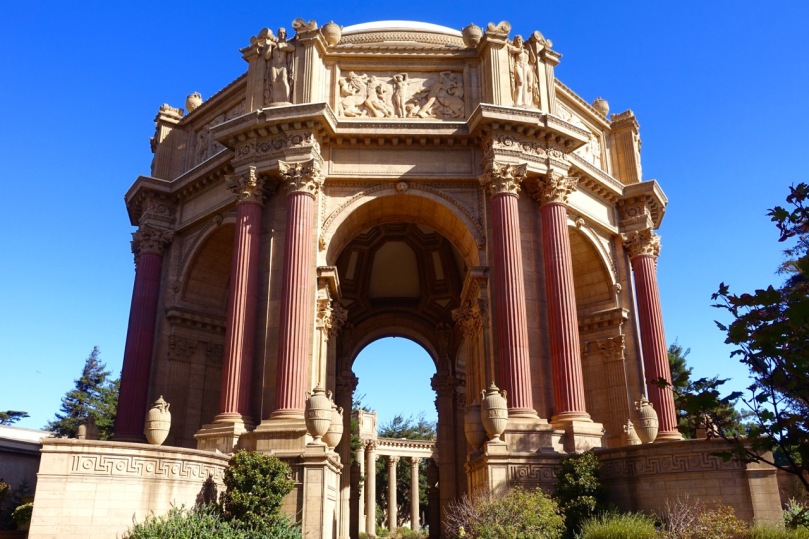 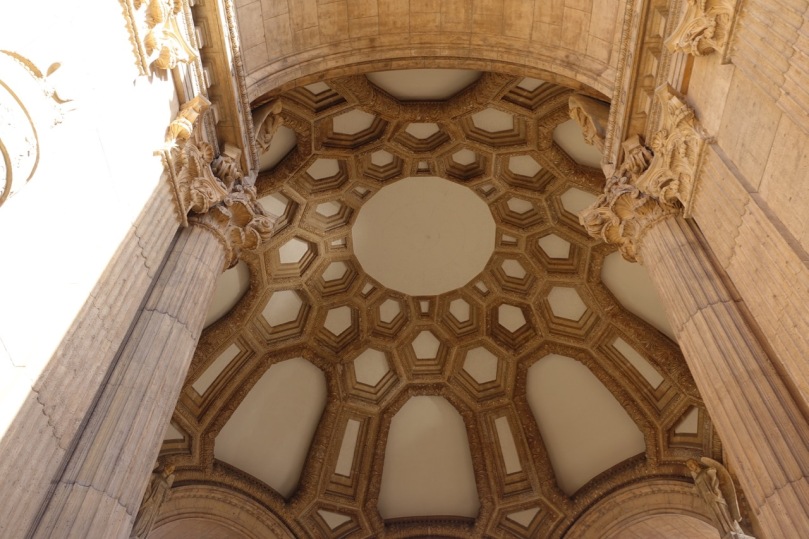 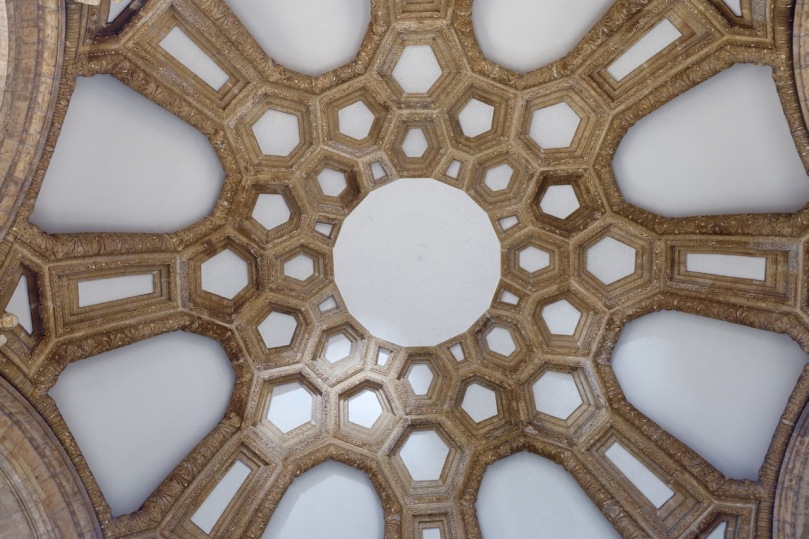 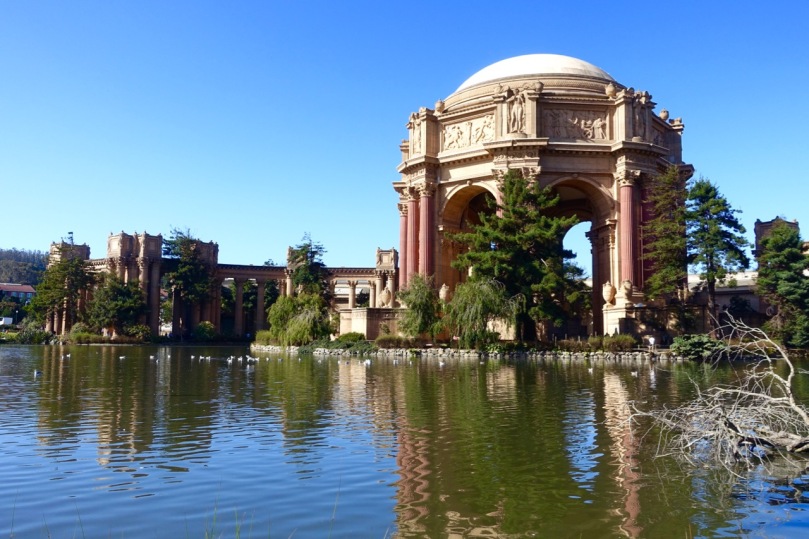 It was an easy walk to Crissy Field from the Palace of Fine Arts, so after ogling some very expensive houses (very very expensive) we strolled on over. This was one of my favorite parts of the day, because we were able to walk along the water, breathe in the sea breeze, and just relax. I think our sleepiness had caught up to us just a little bit at this point, so Christine and I literally sat and took in the sights for at least 20 minutes, people-watching, dog-watching (there are so many dogs it is glorious), kite-watching, Golden-Gate-Bridge-watching… 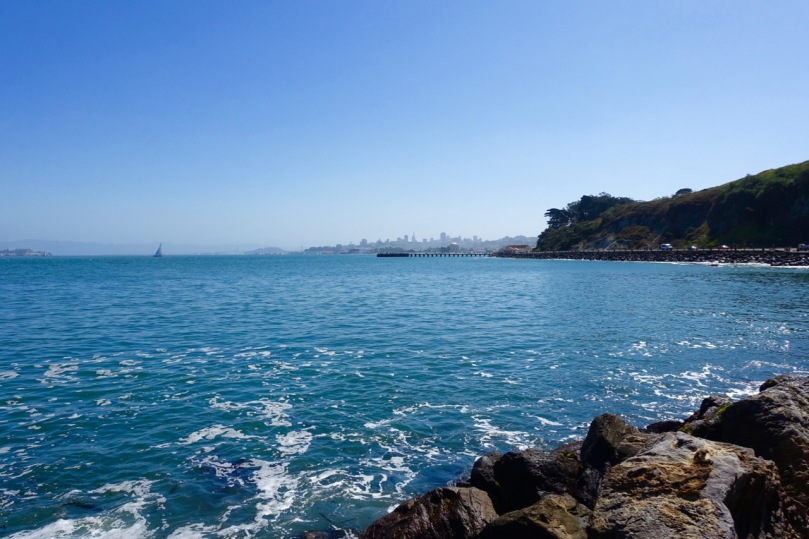 I’m not sure when the last time I felt so at peace was. This is one of my happy places, for sure.

Christine and I had a big day of adventuring, so I’ll leave off here with my rare moment of zen. Our day wasn’t even close to being over though! 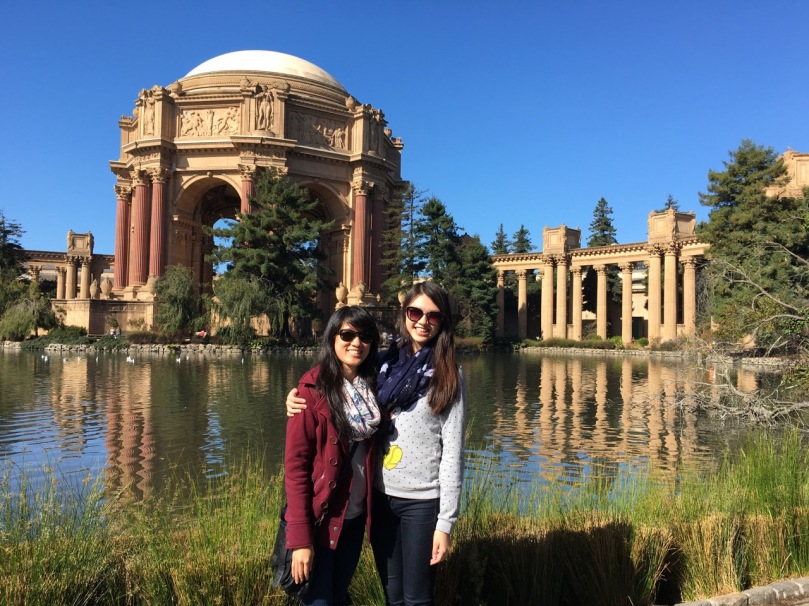 Where is your favorite breakfast spot in San Francisco?
What are the best places for people-watching and Golden-Gate-Bridge-watching?