Yelp had their annual spring break in Fort Lauderdale this year. Even though I have gone to Yelp’s Winter Break in Atlantic City, I never really give any thought to going to Yelp’s Spring Break because they’re usually pretty far and I don’t like thinking about the travel logistics. Even when my friend Annie tried her darnedest to convince me to go along with her and our friend Tim, as they were going to make a stop at the Bahamas, I was not too keen on risking vacation days while I was interviewing for new jobs. HOWEVER, the plan then changed to include dining at Cinderella’s Castle at Disney World and I was instantly sold. Fast-forward a few weeks later, and we were ready for spring break!

After I taught Ben the virtues of rolling and making things fit into a backpack for travel, we dragged ourselves up at 4 AM on Saturday morning to fly down to Fort Lauderdale. Things went pretty smoothly with long-term parking. Ben wouldn’t let me have a doughnut because we were still trying to keep our bodies beach-ready, but hangriness aside, it was smooth sailing.

It was our first time flying with a budget airline rather than the ones we had accrued miles with, but we were really pleasantly surprised because we were fortunate enough to get front-row seats. That translate to more leg room than we’ve ever had before, which was a wonderful treat for Ben, who, at 6’3″, ALWAYS finds his legs cramped on airplanes. Towards the end of our flight, we chatted a bit with a lovely and extraordinary lady who had visited so many places and accomplished so much but spoke of her life experiences like they were so ordinary. It was kind of fascinating listening to her talk about her past adventures and her upcoming reunion with her brother, and I think that chat really got me and Ben raring to have our own adventures in Florida.

Tim and Annie picked us up from the airport and immediately took us for brunch at The Foxy Brown, which had been recommended to them by Blue, the Yelp BPB (Broward-Palm Beach) Community Manager. (Thanks Blue!) I stuffed myself silly and made sure to get my doughnut fix alongside a s’mores waffle and a few bites of the highly touted short rib Benedict.

After brunch, it was off to my first Yelp activity of the weekend: a tour of the Funky Buddha Brewery. (Apologies for all the lens flare in these photos; my lens was a bit on the dirty side apparently!)

Now I’m not really a big beer fan (or a drinker at all, to be quite honest), but I really like learning about anything and everything, so learning about their brewing processes was really cool. Funky Buddha also has a lot of super interesting flavors. I tasted a PB&J that really truly had a peanut butter and jelly sandwich aftertaste, complete with that toasted bread flavor. They were very generous with the samples (a little too generous for me, personally, as I really wasn’t going to drink more than a sip of each one — more for my friends!) but I learned a lot about the brewing methods and the equipment. I even got to smell hops at different stages of brewing, which was really cool. I may not be much of a beer drinker, but I do like chemistry and I’m always excited to learn something new.

From there, we headed to the beach because well, spring break in Florida, right? Well, technically, we made a quick dollar store/drugstore stop because we needed a few things like flip flops, glowsticks, and sunscreen. I really appreciated that all of my friends were very diligent about SPF, although they were probably more attentive because they had been sunburned already and not because they are SPF fiends like myself. The beach itself was great. The ocean water was the perfect temperature, it was a beautiful day, I was with my friends, it was a good time.

Until I got stung by a jellyfish. UGH WHY. I was just splashing around happily in the ocean when I felt a burning, stinging pain on the backside of my knee. (The armpit of the knee, if you will.) (The kneepit?) Ben, bless his heart, did not think too much of my yelling because he thought I had a leg cramp. It wasn’t until I went from yellling “OW!” to “SOMETHING GOT ME” that he came over to help me back to shore while my friends kept offering to pee on my leg. (Note: This does NOT work, please DO NOT go around peeing on your friends’ legs or on strangers’ legs. This is a crazy urban legend that exists solely to test your relationship with a person after he/she pees on you, I think. Especially because it will only make the pain worse.) We were so confused looking at the sting because, if anything, it looks like someone scratched me underwater. Some of us were wondering if maybe I got grazed by a fish with sharp fins? In any case, now I have an interesting scar on my left leg and a mild fear of things getting me in the water.

Well, that cut our beach visit a little short, so we headed back to the AirBnB to shower and check out before our final Yelp activity: a pirate party on a river cruise. I put together my simple Elizabeth Swann outfit and we were out the door without too much of a problem. The real issue came with finding parking, which was dang near impossible. We were SO scared that the boat would leave without us, but there was just no parking to be found. The farther we drove, the more we worried, but we saw people in pirate garb running towards the dock. We also had an emergency where Tim needed to go to the bathroom, and the stress was not helping. We parted ways with him as we tried to find parking and he tried to find a bathroom. At long last, we found parking about a mile away and then tried to run to the boat. As you may remember, I’m awful at running, so this didn’t go over great.  Luckily, we found out mid-run that they had postponed leaving so we were able to walk the rest of the way. Phew! (Note to self: Get fit enough to be able to run a mile.)

While the snacks and drinks on the boat were, as Tim and Annie reported, not as amazing as they were on the earlier days of Yelp’s Spring Break, we still ate a decent amount of food, got some pretty sturdy tote bags from SlickDeals, and got to see a truly amazing view from the top of the boat. On the East Coast, we don’t get to see the sun set into the ocean very often, so this was a nice little treat for us. 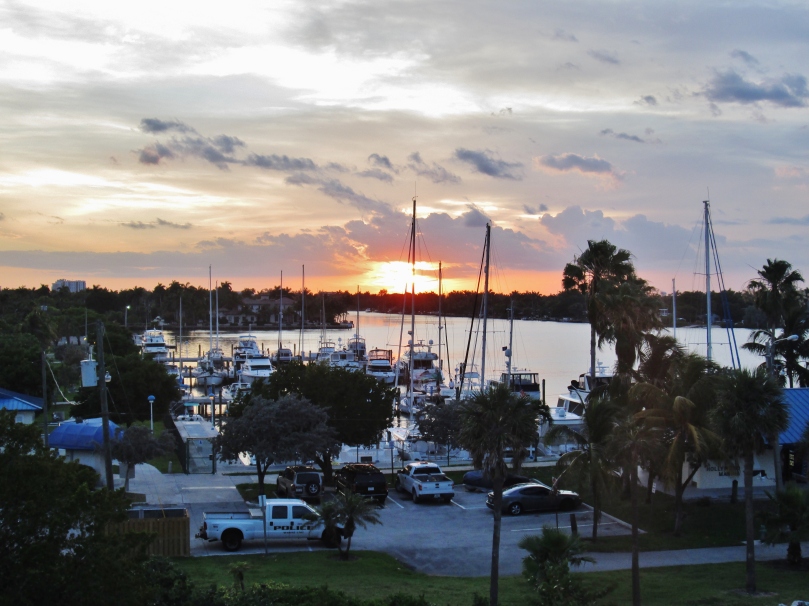 At the end of the evening, while other Yelpers were heading to an afterparty, we piled back into our rental car and started a long drive towards Key West. Along the way, I swear I saw more adult video stores and strip clubs along this road/highway that we were driving along than I had seen cumulatively in my entire life. Why do you need so many of those, Florida? It just seems like there were so many that they couldn’t possibly all be doing really well financially? Are people really unwilling to drive an extra 2 miles to get to one, you have to have them so close together also? It was weird.

One of my favorite things about this drive was how clear the stars were. I’ve never seen the stars like this, because I don’t think I’ve ever been this far south, this close to the equator before, so I was able to look out closer to the horizon and see the Big Dipper, brighter than I had ever seen those stars before. I spent a good portion of that car trip with my face pressed to the window, staring up at the stars. I can’t imagine living far from a city, but seeing the stars like that made me really wonder what life would be like if I could have a view like that every day, unmarred by light pollution.

The night wasn’t over after hours of driving to Key West. The AirBnB hosts had recommended an interesting bar called Garden of Eden, which is a “clothing optional” institution. As you climb the floors of this bar, clothing gets increasingly rare. Unfortunately for my friends, I was feeling really tired and cranky at this point and didn’t want to see any butts or nipples, so I passed on paying the all-too-necessary $5 cover charge for some free dancing elsewhere. Duval Street seemed to be lined with little else than bars and more bars, with one particularly cute place called Smallest Bar that lived up to its name. It was indeed the smallest bar I had ever seen.

The plan for the end of the evening was just to crash on the beach. I felt really weird about this, especially in my tired/cranky state, so I opted to sleep in the car. (I definitely spend a lot of time sleeping in cars anyway, so this comes second-nature to me.) I learned some tricks for doing this overnight (pro tip: open two car windows about halfway, drape a towel over the door, and shut the door so that you can still have fresh air come in through the towels but no bugs or other random things blowing in through an open window!) and slept pretty well.

Until the wild roosters of Key West started crowing at 3 AM. But we’ll get to that on day 2.