Just a note that I didn’t take very many photos this past trip, as I was really just trying to… take it all in. In fact, Ben and I didn’t even think to take my photos of ourselves or of each other. We’ve come to the point where we’ve visited so many times that we aren’t taking as many photographs. We’re trying to enjoy each other’s company, the company of our friends and family, and this amazing city that I have loved for so many years.

Apologies for the massive blocks of text!

Ben and I went up to New York the weekend after Independence Day (aka a few days after returning from the wedding in Roanoke) in what has become an annual trip back to my home city, to The City. We headed up Thursday evening after work, grabbed some McNuggets at Union Station to stave off hunger, and eagerly awaited getting some of that Halal Guys combo with rice at 53rd and 6th. (We were told that the Halal Guys would open franchise locations by the summer of 2015. As you may have noticed, it is now the summer of 2016 and the locations have yet to open…) (STILLMADABOUTIT)

This was the first time that Ben and I really took advantage of good ol’ New York City yellow cabs for getting around, starting with getting from our bus stop to our hotel, which was about 2 miles away. I’ve always preferred traveling by cab over ride-sharing services like Lyft and Uber, and the advertising in the cabs confirmed a lot of the reasons I had. Drivers are vetted, you know exactly where your fare charge comes from, there isn’t surge charging, and you are able to hail a cab without dealing with an app that maybe doesn’t work or picks up the wrong person or something. The reason I think those apps succeeded is because they were great apps that allowed you to summon cars when you weren’t able to wait on the road and hail a cab in a lower-traffic area. But now that New York has apps that allows you to do that with cabs, I honestly don’t see a need for Uber or Lyft. Some people are under the impression that taxis have a harder time accepting credit cards, but that’s just not true. Legally, all taxis must accept credit cards, and you can also use the app to pay for your ride as well, just like you can with other ride-sharing services. Long story short, I take yellow cabs when I’m in the city because it is really convenient and I don’t think that Uber or Lyft have changed that. (Note: Big Taxi did not pay me to say any of this. 😛)

We arrived at our hotel, totally pooped, but I managed to peel myself off the bed so we could get what we came to New York for – that chicken and rice from Halal Guys. I was maybe too exhausted to really make that trip, but dang it if it wasn’t maddeningly delicious. (Maddening because… we can’t have it at home yet. We have to make this pilgrimage to eat this simple meal.)

After a small mishap with the super dangerous red sauce (it is spicier than you think, I am pleading you not to underestimate it) and me wandering around the floor to find the ice machine to mollify that situation, it was time to sleep and get ready for our first full day.

I forgot to mention that I decided to try to enter a few Broadway lotteries this weekend. (Spoiler alert: I won none of them.) We slept in a little bit and then skedaddled off to Madison Square Park to meet one of my oldest friends, Connie. (We met up with her a few years ago when she was back at her old office!) Connie was my neighbor and dear dear friend before I moved to Maryland, and it was great to be able to see her and pick right back up again as friends. We got lunch at Bao Bao Cafe, where we sweated it out eating little hot pots. (Can I share a potential TMI with you? I had my legs crossed at one point while we were eating, and they were slick with sweat. I uncrossed them so easily because my legs just schwoop! slipped apart.) (It was so freaking hot that day, I really thought we left the heat and humidity in DC…) In retrospect, maybe I should’ve gone by the treat yo self motto and gotten a lobster roll at Burger and Lobster, which Connie suggested upon detecting my intense indecision. The Cloudy Mellon drink was as nice as Yelp reviews promised, although I don’t know why people were so adamant that it tasted just like a cloud. (Wouldn’t clouds just taste like water??? It was tasty though.) 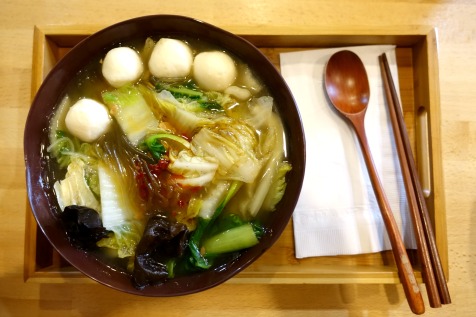 After squeezing every last minute out of Connie’s lunch break, we dropped her off back at her office and headed for Rockefeller Center. Ben hasn’t actually spent that much time in this area, although my family can’t resist its magnetic pull during the holiday season. (Upon which we become part of the horde of tourists and cannot escape the holiday cheer and jostling.) From there, we struggled to find our way to Top of the Rock to see how the view compared from last year’s spectacular experience atop the Freedom Tower. With the sweltering heat and no plans until dinner, Ben and I really took our time to enjoy the whole thing, including the informational videos at the beginning before ascending to the top. It was great learning about the history of the Rockefeller Center. For example, I didn’t know that it was named for John D. Rockefeller Jr., and not his father as I had previously thought, that he had commissioned it during the Great Depression as the sole financier, or that he really believed in the future of technologies – like radio – even when he he personally didn’t like to use them.

Stepping outside on the observation deck was still really hot and sweaty. We spotted a girl who was taking a nap on the benches inside and agreed that maybe she was the wisest of us all. It wasn’t as wow-tacular as One World Trade, because it’s not as high and not as new, but we still enjoyed looking out at the Giant Trash Can and other local landmarks from the top of Rockefeller Center.

From there, we were already pretty pooped, so we went back to the hotel and I took a tiny nap. !!! I usually never nap during the day while I’m on vacation, but I was just feeling so out of it, with the heat making things worse. So I lied down, shut my eyes, and made sure I would be awake in time to get dinner with my brother, who was in the city for a summer internship.

The blocks of text are getting a bit unwieldy, so let’s pause here!

I would recommend visiting Rockefeller and learning about the history of the area, especially if you are interested in the history of Manhattan and in radio and television. (NBC has been here since its inception with the Radio Corporation of America.)

Do you take cabs or use other ride-sharing services in New York?
What would you have recommended for lunch on a really hot day?