Previously on Paris 2017, we wrapped our last day in Paris with a highly-anticipated engagement photoshoot, stocking up on French skincare items, and exploring Montmartre, mainly the Sacré-Cœur and Moulin Rouge.

TL;DR Disneyland Paris is a fun park to visit for fans, especially European ones, but not particularly impressive for folks who have visited American parks in the past. (I can’t speak to the Asian parks.)

Disney park tip: If possible, book your stay at a Disney property so you can take advantage of Extra Magic Hours and get into the park before it opens to the general public. This is definitely worthwhile if you want to maximize hours spent at the park and want to visit something that has a long line.

By the way, remember how it’s been rainy most days of our Paris trip? We experienced the heaviest rain on our Disney day and were greeted with this view of the castle when we walked into the park.

I heard that one of the highlights of DLP (Disneyland Paris) is there is a dragon sleeping under the castle! We were on such a rush mission to see the dragon before a crowd grew around it and woke it up.

We walked around a bit and saw on the DLP app that Pirates of the Caribbean actually had nearly no line, so we hopped on to see if the ride was any different in France. It wasn’t, and I was slightly let down because some people cited this ride as a highlight of the park. Because of the glowing reviews of this ride (by people who’ve been to at least one American park), I started getting worried that this park didn’t really have a lot of novelty to offer.

Afterwards, we grabbed some quick bites via a crepe (Ben loves his crepes) and a star-shaped doughnuts (you know me and doughnuts) (and star-shaped things…) and then actually ran back to the hotel because it looked like it was going to rain and we needed to get more rain protection. We took a fairly leisurely walk back to explore the park but a lot of areas seemed closed (it was off-peak season) and we learned that in a French theme park, even a Disney one, there will be a smoking area. (The French are still pretty strong smokers, judging from the large crowds engulfed in smoke I saw outside of bars and cafes back in Paris.) We decided to go into Walt Disney Studios Park from the hotel because it was open to the public (no magic hours there) and we learned that there was a French food festival happening!

Each region of France was represented with its signature foods. Basically, it was the perfect little tour of French cuisine for us, and it may have been the highlight of our entire park visit. 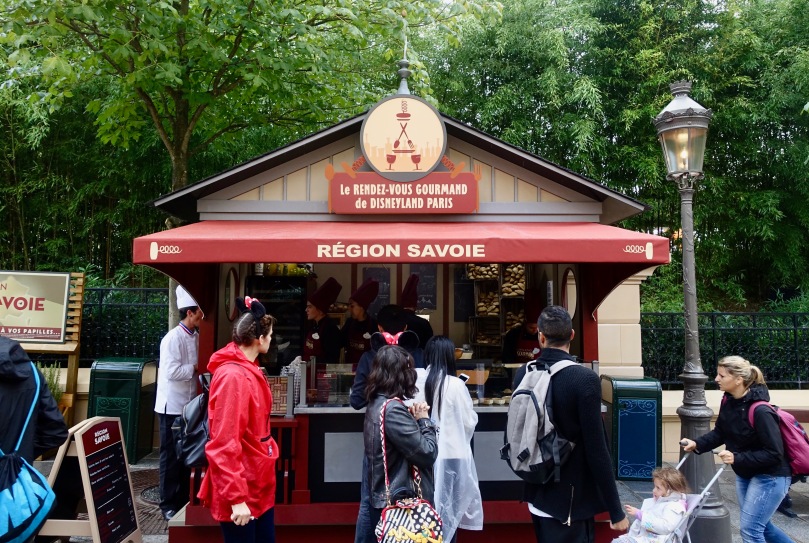 We tried a little bit from most regions, aside from Bretagne (thanks Breizh Café) and Savoie (with long lines for raclette, which we had zero interest in because we’re not cheese fans), and had a pretty positive experience with this, despite the fact that they did have to microwave a lot of the food for us. It was still some of the better food we ate in the parks. (The rumors are true: DLP does not have good food despite being in France, a country known for its great cuisine… as evidenced by this food festival.)

We weren’t able to try food from everywhere, but I’m really grateful that this food festival happened during our visit because we really did learn a lot about the different regional cuisines of France! 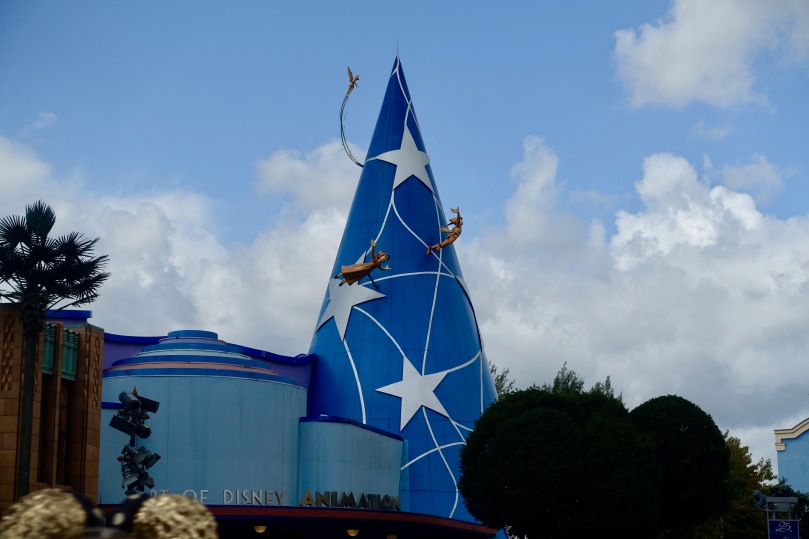 In addition to Hyperspace Mountain, we rode the really fun Rock ‘n’ Roller Coaster, featuring Aerosmith and a lot of really cool rock ‘n’ roll memorabilia and history. There is also a very random (and not very good) ride based on the 1998 Armageddon movie, which I think Disney thought would be a longer-lasting hit than it was. From there, we hustled back to catch a Star Wars stage show that ended up being kind of disappointing… it wasn’t interactive, there was no story…? It was just a parade of characters and then it was over. 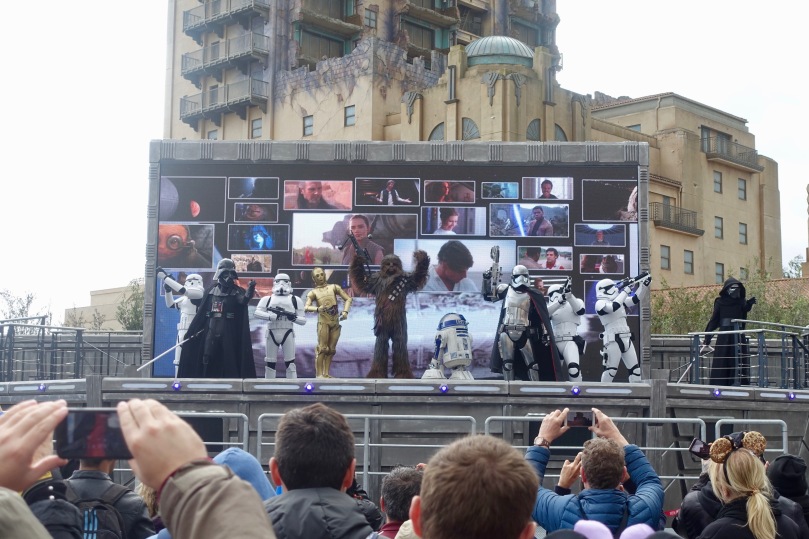 It was around this time that I learned that maybe European Disney guests are pretty different from American ones. For example, I didn’t see many Disneybounders at all. (The few I saw… I’m pretty sure were American.) Also, I would see great photo opportunities with no wait for them at all and then watch as a line formed behind Ben while he took photos of me. Apparently, the behavior I learned from American Disney fans on Instagram (specifically, posing in front of Disney’s plentiful photo-ready walls) made me something of a trendsetter that day in Disneyland Paris? We were really excited for our dinner reservation at Chez Rémy, the Ratatouille-themed restaurant that is modeled like Remy’s little rat-sized restaurant in the movie. The concept is very cute, decor-wise, but this was one of the most disappointing experiences we had at DLP. The food was extremely meh-to-bad tasting, and a lot of it didn’t even photograph well? I expect Disney to at least value style over substance, but never did I imagine they would execute neither well. The MOST disappointing thing was when our waitress recommended the chocolate cake to us and it came out looking like a literal mug cake that got dumped on a plate, with a cloying yet not sweet enough sauce. It was mushy and also cloying but not sweet enough and just terrible and ugly. I don’t know why the waitress recommended it to us. Maybe she hated us, she didn’t seem very happy.

Walt Disney Studios Park actually closes at 6pm, and with our dinner going over, we had to wait for every party to finish dining so that we could be escorted out the empty park by a park employee. It was a super surreal experience, walking through an empty park!

We went back to Disneyland Park as the sun was setting, aka my favorite time of day anyway but especially in a Disney park.

We rode Haunted Mansion, as I had heard that it’s a bit different here and very special and unique but… it… was not? After that really disappointing meal, I was starting to feel really jaded about all the tips we got for things to do at DLP… 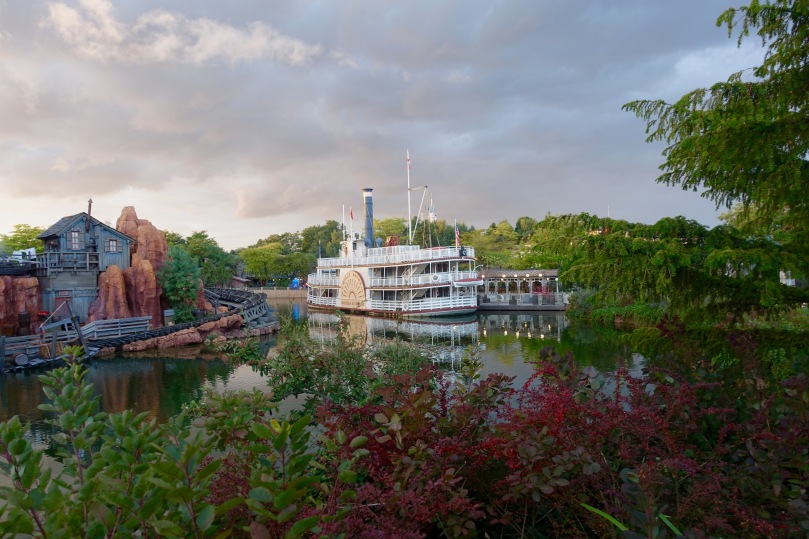 Nothing could really ruin golden hour, though, so we headed over to what has become my favorite Disney place during golden hour: the Tomorrowland/Discovery Land/whatever has the Astro Orbiter.

I like that Paris has a Jules Verne-theme instead of a what-the-future-looked-like-in-the-50s theme, it did add a unique spin and didn’t seem as dated since it is not a prediction of the future but a projection of a specific vision of the future.

We revisited the classic Buzz Lightyear Laser Blast (I finally beat Ben!!!!!!!!) and also toured the Nautilus from 20,000 Leagues Under the Sea. (I fear this is the kind of attraction that will get replaced by something from a more recent movie someday soon.) From there, it was time to get ready for the evening fireworks show in front of the castle! I told myself I would just enjoy it and not take photos but… it was just so gorgeous. I would put the camera away and then find myself frantically getting it out to capture a shot. 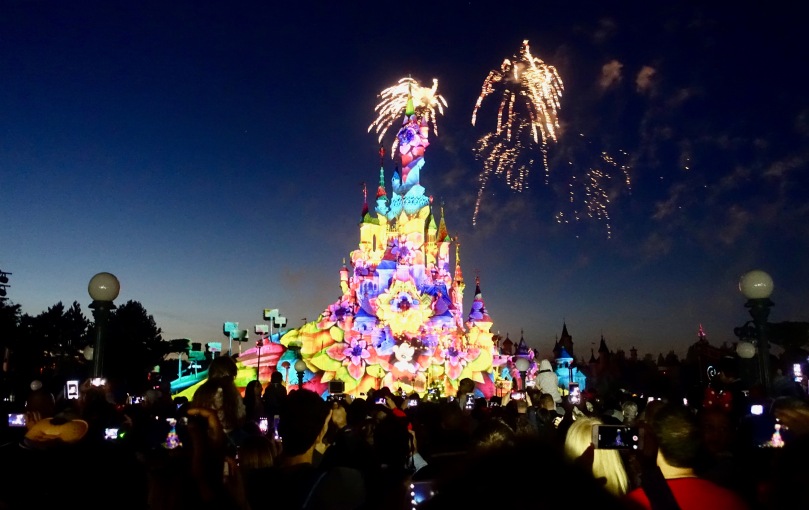 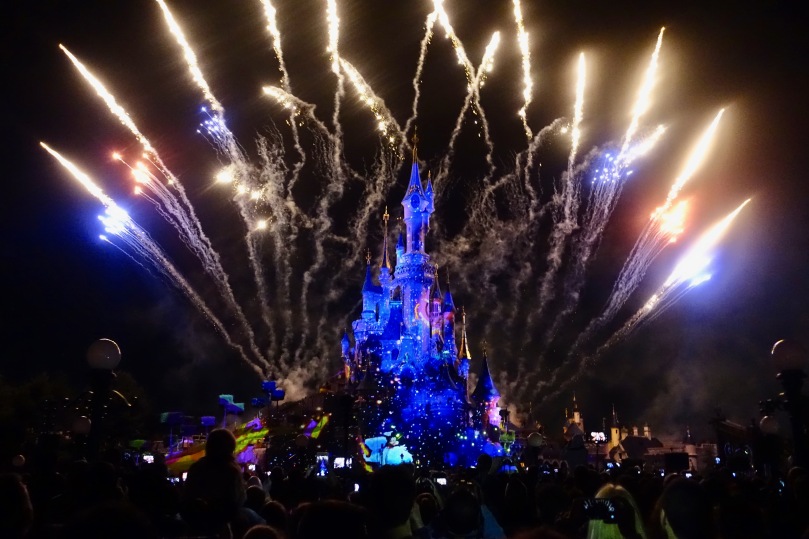 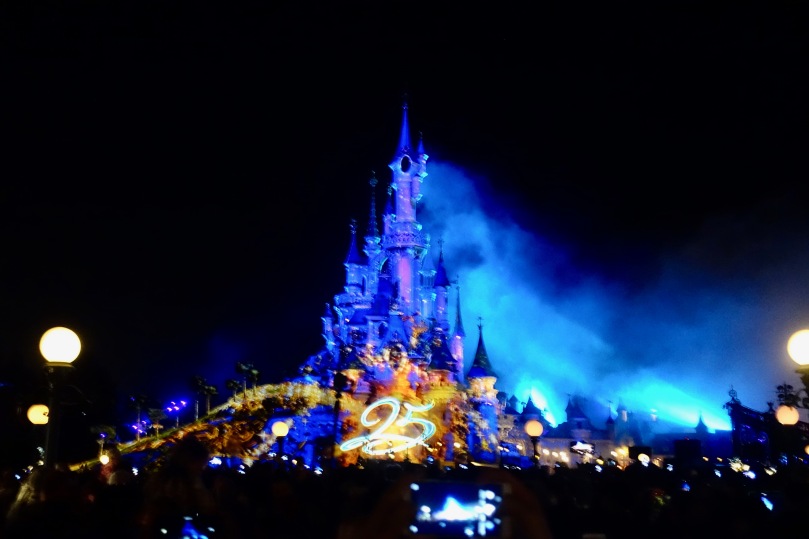 Despite feeling a bit let down by the overall experience (and how salty I was that the castle show featured all these classic Disney animation clips and then a clip of live action Beauty and the Beast………….), it was really hard to not walk away from DLP feeling a bit of magic. I cry during the castle show every dang time.

That’s it! That was our last day in France! We were kept awake by a crack in the window, which led to a screeching howl every time the wind gusted by (aka every 5 minutes since it was storming out) and then waited until 3AM for a maintenance person to come by and basically… tape it shut.

Needless to say, we left France a little tired and cranky but really grateful for all the adventures that we had.

I can’t believe I’ve somehow managed to visit a different Disney park every year for the past few years! I feel extraordinarily fortunate to have had the opportunities to visit and compare these theme parks in a fairly short span of time.

What are your favorite things about Disneyland Paris? What’s your favorite Disney park? I’ve heard some good things about the Asia parks, although I believe they are also not run directly by the Walt Disney Company, right? That might be why their merchandise game is so different… and adorable!

What did we miss out on while we were in France? I think it’s really likely that we’ll return, so I’ll try not to ignore my Duolingo and practice that French so I can do even better with it the next time I go!

I’ll also try to get vlogs up because I have been diligently recording videos but… well, I have a lot of vlogs to get up and I take a long time with them… But I’ll do my best!

Can you believe it’s December already? Do you have any posts you’d like to see in particular? I am aiming to get my New Orleans recap up soon and maybe a gift guide or two so that you have someplace to start brainstorming as we get into gift exchange season!