If you would like to see a recap of my Red Lobster Yelp event, check out my review for the event on Yelp, because I made sure to be nice and detailed and include my photos from the night. I am usually not THAT active on Instagram (I typically do a maximum of one photo a day) but they were giving out gift cards for the social-media-ly active.

BASICALLY I holla’d for a dolla. And I got a gift card so it paid off! It was an amazing event, I had the BEST time. It would’ve been the sole highlight of my week.

That is, of course, if I didn’t attend the amazing Muse concert Wednesday evening.

I bought the tickets on April 11, 5 months prior to the actual concert date. I was SO so so very excited. I started listening to Muse relatively late, my freshman year of college, but I immediately loved them. I don’t really listen to any rock bands, but Muse is my favorite band. For an indecisive person, it’s nice to know I have a favorite band.

I’ve never been to a big proper concert. I’ve been to performances at school before, which are big and feature big artists, but it’s not quite the same, you know? And I saw Turquoise Jeep this past spring, but it was a small intimate venue and, admittedly, their influence is no where near as wide and impactful as Muse.

It was a struggle to get in though. I purchased my tickets through Muse’s website, as a member, earlier than the general public. I learned that the concert was using paperless ticketing, but that I was paying shipping. I guess that means I was getting a paper ticket. That ticket never came in the mail, so a few frantic emails later, they informed me that I could pick up my tickets at will call.

That service was NOT Ticketmaster, the company that takes care of will call at the Verizon Center. So when I showed up, all eager and bright-eyed, they couldn’t find my tickets. It took about half an hour of me sitting without my driver’s license and trying not to cry on the phone with customer service as the will call folks scrambled to figure out what was going on. FINALLY they figured out why they had trouble finding my tickets.

My tickets were listed under my name. But as “Last initial. First name“. Starr is my first name, but they had it as my last name, so obviously they weren’t pulling up a match. What I don’t understand is why they didn’t just use my invoice number or seat numbers to check the first time I went, since that’s obviously what they had to do to find my tickets in the end. I’m sure if you saw someone named “Thomas Jones” but the reservation was made under “Jones Thomas” for those exact tickets, it isn’t a coincidence, it’s an error. (Fun fact: I do have a friend whose first name is Jones and last name is Thomas. Apparently, many people get confused by this.)

IDIOTS AREN’T GOING TO GET ME DOWN. I made it in time to catch the opener, Cage the Elephant. Now, I hadn’t heard of them before, but I certainly have now. The frontman is… a character, to say the least. He’s very energetic (likely under the influence of… something) and lively. Their music was good, though. I was feeling it. The enthusiasm of frontman Matt Shultz helped a lot. It was pretty infectious, although I spent a lot of their set looking like this: O.o

Their set ran for an hour, and we had to wait for another 30 minutes before… 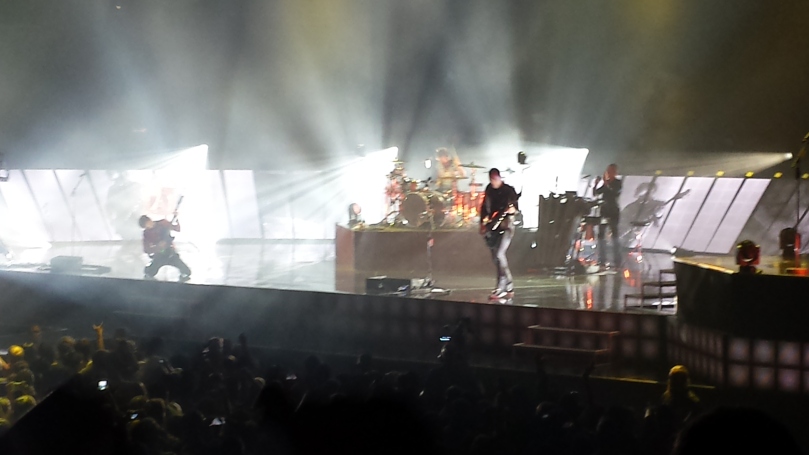 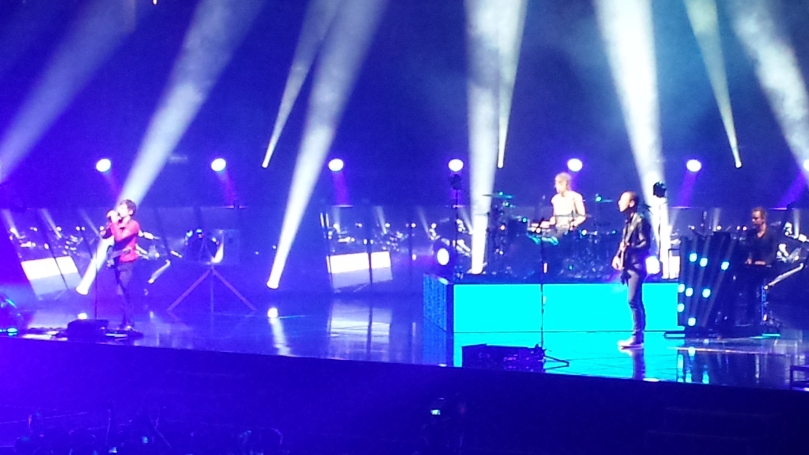 I don’t have the words to describe… how elated I was to see my favorite band in person. I kept marveling at the fact that I have only seen Muse through my computer screen, so the fact that this experience was surrounding me blew my mind.

The laser show was amazing. The stage was magnificent. And Matt. Oh Matt. I had a confusing crush on Matt when I started getting into Muse that helped me understand why girls throw their underwear at rock stars. I was never the kind of girl who liked rock stars until Muse entered my life. It needs no mention how cool and amazing Chris and Dom were, too.

ALSO. They had some fancy video equipment, if they were playing live footage on the screen. So much editing within the live footage, it was amazing. If they use the DC footage for the tour DVD, it’s going to look SO FANTASTIC, seriously. Just the footage that was played on the screens would suffice.

Here’s the setlist from the show, courtesy of Peter Hutchins on Tumblr:

I had the most amazing amazing time that could only have been improved if the couple in front of me spent less time making out and more time enjoying the concert. I think I wished that they interacted a bit more with the audience, but you know, I would rather have more music than waste time with people going up on stage or them trying to tell jokes. The music is ace.