I’ve been a fan of comedy duo Key and Peele (Keegan-Michael Key and Jordan Peele) since they were on MADtv together. Their Comedy Central show, Key & Peele, has churned out hit after hit after hit. Although I don’t have Comedy Central, I’ve seen nearly every single sketch available online and I can’t think of a single one I didn’t find funny.

You know what, I was pretty dubious that this movie would be funny. And I’m not sure why, seeing as how I have seen sketch comedy successes be hilarious in a feature-length film. (See Coffee Town.) Keanu was like a few different sketches that were strung together into one cohesive story. From the get-go, I was already laughing at the extremely dramatic music playing when the lights dimmed. (Me to Annie: “What is happening? Are we even in the right movie????”) I was only reassured that everything was going all right when I saw the star of the movie appear on screen: the most adorable little kitteh! (Fun fact: 7 kittens were used for the filming of Keanu. All 7 were adopted!)

If you enjoyed Key & Peele, then you will really enjoy this movie. If you’re an avid fan of the show, you’ll definitely appreciate certain nods to their sketches. (Guess who is the star of a movie they see in the movie?) Key and Peele are able to flex their comedy muscles while making subtle social commentary about blackness and drug culture and violence and language and lots of other great stuff.

END_OF_DOCUMENT_TOKEN_TO_BE_REPLACED

Thanks to a spur-of-the-moment invitation from my friend Annie, and a promise to myself to try to be more spontaneous and open-minded, I attended an early screening of the new holiday-centered ensemble-cast movie, Mother’s Day, brought to you by the same folks behind Valentine’s Day and New Year’s Eve.

Well, it is a Garry Marshall movie, at the end of the day, but I I did feel myself laughing and having my heartstrings tugged more than I expected. Mother’s Day has a smaller ensemble cast than the other holiday-themed movies do; whereas you’re juggling something like 20 stars in the movie (and on the poster!), we really only have a few storylines to follow in Mother’s Day, and as a result, there isn’t as much reaching around to connect the characters to each other.

I feel like where Mother’s Day does well is pretty relatable mom-centric stories, whereas previous movies mostly fun but ultimately super improbable romances.

Mothers are pretty hard to mess up on making an emotional connection with the audience about, and I felt like this movie was definitely better at touching viewers than the past holiday incarnations were. As incredibly cheesy as this movie was, it was still a fun watch. If you are here for a non-cheesy rom-com, look elsewhere. END_OF_DOCUMENT_TOKEN_TO_BE_REPLACED

Last time on Spring Break 2016, I landed in Vegas for my friend, Megan’s, bachelorette party and we headed straight to the club to get our dance on. After 26 hours awake and a weird song choice by the DJ, we called it a night so we could have energy for the next day…

I was pretty surprised by how not-late I woke up, thanks in no small part to the sun streaming through our open window. It was my first full day in Las Vegas (and Paradise, if you want to pick bones about it) and I was excited to leave the frigid cold of the DC area behind. (The day before my flight, I endured a blustery 30°F walk to work.)

First order of business was brunch/lunch at Mon Ami Gabi! We actually do have locations in the DC metro region, but none of ours are below the Eiffel Tower with a gorgeous view of “Paris”. I have never been to the locations over here and I’m not sure I can ever go knowing that it won’t be as magical as it was over in Vegas. It’s a really cute restaurant, and the hyperrealism that Beaudrillard wrote about is in full force here as you sit in a “Parisian cafe” on the Strip. In anticipation of eating a lot of waistline-unfriendly food for this trip, I stuck with a really yummy salad and we all kicked off the day with yummy food in our bellies.

Meanwhile, the bachelor party crew was at Hash House a Go Go. While I had seen Christine mention going there before, I didn’t realize that the portions were hilariously humongous, as evidenced by the photos we were sent to incur jealousy. Warning: You may want to share food here, do not try to be a hero! END_OF_DOCUMENT_TOKEN_TO_BE_REPLACED

Let’s kick off recap season strong, shall we?

Although we had planned to get everything ready the Monday evening before our trip, Ben and I kind of zonked out and had to ready ourselves to wake up early Tuesday morning because there was just no way I was going to shower or finish packing Monday night. I was already too exhausted. We did, however, spend a decent bit of time bopping our heads to some get-hyped music:

SO. It’s 4AM Tuesday when I roll out of bed to finish packing and to shower and get myself ready to go! The work day flies by and the next thing I know, I am back at home and a miracle happens: my package is at my door! It has arrived at the latest possible moment, but I can bring my new sandals and swimsuit on my trip. (Which is great because I bought them for the trip, so.)

Ben and I head to the airport, park our car, and I proceed to be 100% passed out on the plane. Except for the one time than I was awakened because there was now a cup of water and a snack on my tray table. (Note: NEVER ever wake me up for things like this when I am flying, I will fly into a sleepy rage.) After my little nap, we arrive in Las Vegas! Almost an hour early, actually, thanks to a nice headwind.

SO, I got dropped off at Planet Hollywood while Ben went off to Don’s bachelor party suite at Stratosphere. While Ben was greeted with shots walking into his suite, I was greeted with a much tamer scene. Some cell phone chilling and fish tacos!!

Anyhow, we arrived in Vegas at close to 11PM and my crew headed to Omnia at around midnight. At this point, I would like to remind you that I woke up at 4AM Eastern time. That translates to 1AM Pacific time. And now I am only leaving the hotel at 12AM Pacific time. And while I was not greeted with shots, being greeted with the NSFW bachelorette party goodies in the hotel room was a strange experience in and of itself… (Given that I am the vigilante who will herd children away from the bachelorette party section of Spencer’s. They get lured in by the Pikachu backpacks and start walking towards the lava lamps and they don’t need to see all the sex toys in between!)

END_OF_DOCUMENT_TOKEN_TO_BE_REPLACED

Gretchen Rubin is perhaps best known for her book, The Happiness Project, where she details the little ways you can actively make yourself a happier person. In line with this idea of being mindful and conscious of improving the quality of your life is Better Than Before, which is about habits. 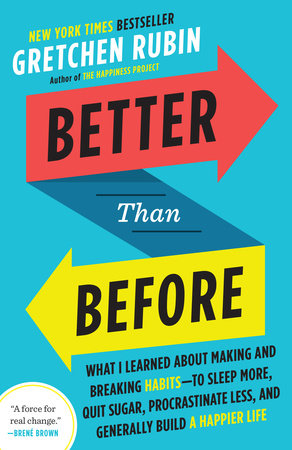 Why did Rubin focus so much on habits? She talks a lot about how our habits make up who we are, at the end of the day. These are the actions that we do frequently, reliably, dependably. What are we but the sum of our habits, good and bad? Habits are really powerful because good habits help us be the person we want to be and bad ones often are obstacles to us achieving that goal.

I’m going to go into some issues I had with the book before covering what I really liked.

TL;DR – While nothing Rubin says is revolutionary or particularly novel, and her approach to encouraging habits in other people comes off as really pushy, I really admired her thorough investigation and categorization of personality types and how best to form habits for those types. END_OF_DOCUMENT_TOKEN_TO_BE_REPLACED