Last time on Spring Break 2016, I landed in Vegas for my friend, Megan’s, bachelorette party and we headed straight to the club to get our dance on. After 26 hours awake and a weird song choice by the DJ, we called it a night so we could have energy for the next day…

I was pretty surprised by how not-late I woke up, thanks in no small part to the sun streaming through our open window. It was my first full day in Las Vegas (and Paradise, if you want to pick bones about it) and I was excited to leave the frigid cold of the DC area behind. (The day before my flight, I endured a blustery 30°F walk to work.)

First order of business was brunch/lunch at Mon Ami Gabi! We actually do have locations in the DC metro region, but none of ours are below the Eiffel Tower with a gorgeous view of “Paris”. I have never been to the locations over here and I’m not sure I can ever go knowing that it won’t be as magical as it was over in Vegas. It’s a really cute restaurant, and the hyperrealism that Beaudrillard wrote about is in full force here as you sit in a “Parisian cafe” on the Strip. In anticipation of eating a lot of waistline-unfriendly food for this trip, I stuck with a really yummy salad and we all kicked off the day with yummy food in our bellies.

Meanwhile, the bachelor party crew was at Hash House a Go Go. While I had seen Christine mention going there before, I didn’t realize that the portions were hilariously humongous, as evidenced by the photos we were sent to incur jealousy. Warning: You may want to share food here, do not try to be a hero!

After some yums and a quick SPF stock-up, we got changed and headed to the pool at Planet Hollywood for some sweet poolside chilling. (While the original plan was to do some pool clubbing in the evening, at this time of year, even though the days were 80°F or more, the evenings are just too chilly for the pool.) This may have been one of the quietest pools I’ve ever visited, with no kids screaming and splashing around. The adults weren’t really splashing or screaming either. Mostly, folks were just sunbathing, and only a few people were even touching the water, by sitting on the edge of the pool and dangling their feet in the cool blue water. Even the EDM tracks playing in the background seemed fairly quiet. It was another moment of peace where I was able to take time to just soak up the blue sky, the warmth of the the sun, the palm trees next to the giant Britney Spears billboard.

It was another strangely quiet moment, but we enjoyed basking in the sun and, after an hour of coaxing myself into the water, enjoying the coolness of the pool. When a few of us were satisfied with our tans (and I had checked that I had, indeed, not deepened the shade of glow-in-the-dark pale I am going for), we headed back to our room, showered, and lazed about. I think the girls actually all managed to nap a bit before we headed out for dinner.

Dinner reservations were at 6PM for a meal at Todd English’s Olives over at the Bellagio. While I actually don’t like olives, I really enjoyed our meal here. I got this delicious handmade gnocchi with smoked duck breast and it was pretty incredible, not gonna lie.

We thought that maybe we’d be sitting around for a while at Olives, which is why our reservation was 2 hours before our concert was slated to start, but our food came out quite fast, actually, and we were out before 7. So, we decided to take a leisurely walk around the shopping complex at the Bellagio and head to Jean-Phillipe Patisserie for dessert.

Fun fact: Guinness World Records recognizes their chocolate fountain – from which white, milk, and dark chocolate cascade from the ceiling to the floor – as the largest chocolate fountain in the world. They had some stunning desserts here, my friends. You have to see it (and taste it!). 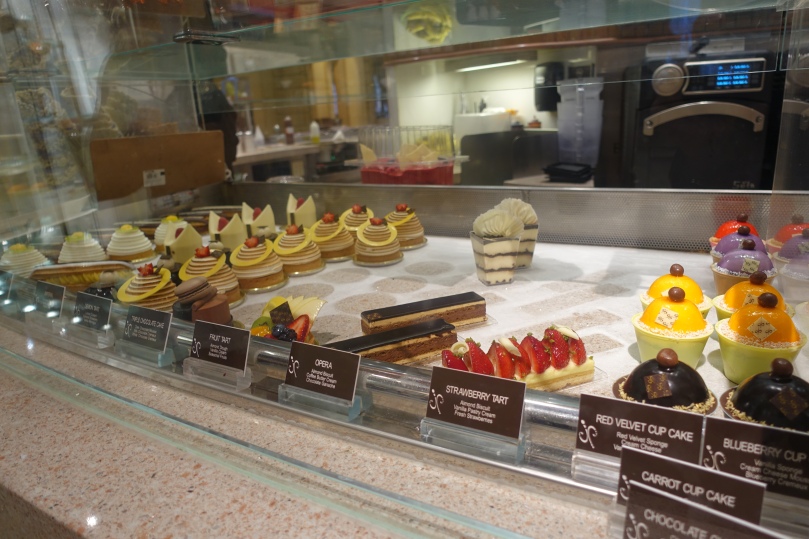 With our concert starting at 8, we headed over to the brand new T-Mobile Arena to see The Killers! This concert was, in fact, the opening concert for this arena, so we were the first audience to see a show here! (The second show was Nicki Minaj featuring Ariana Grande, I believe!) Shamir kicked off the show followed by Wayne Newton, the King of Las Vegas himself! (He was pretty amazing; at one point he played something like 5 different instruments, I’m not even exaggerating. At least 4 – the guitar, the banjo, the violin, the trombone… and I think one more?) The Killers are the largest band to be native to Vegas, so it was only fitting that they come back to their stomping grounds to kick off shows here.

They did things right by starting right away with “Mr. Brightside”, a song that will forever trigger our generation to jump and shout along with the lyrics. It was a great concert, featuring all our favorite songs by The Killers, incredible lights, and awesome guest appearances by the Blue Man Group and Dan Reynolds from Imagine Dragons. The Killers performed Johnny B. Goode, a la Back to the Future (“This is a blues riff in ‘B’, watch me for the changes, and try and keep up…” – Marty McFly or Brandon Flowers?) and Wayne Newton came back onstage to wail on the guitar.

It was a really incredible concert, because it was a tribute to the best of Wayne Newton, The Killers (sorry no one was excited to hear your latest album), and the city of Las Vegas itself as Brandon Flowers gave an encore performance of “Viva Las Vegas”, making it the second time we were hearing the song that evening. There were balloons, there were showgirls, Blue Man Group and Dan Reynolds came back out. I was dead tired at this point, mostly sitting down and struggling to stay awake enough to sing along with songs. But I had a really awesome time at this concert.

While we ambitiously planned to go out after the concert, all 4 of us were pretty pooped, so we restocked on some snacks and headed back to the hotel for some more chillin’ before passing out for the last time in our Vegas hotel. I was still amazed that we were able to maintain a fairly relaxed pace with our time in Vegas, having agreed to come to the bachelorette party thinking that it would just be non-stop madness. I’m glad it was a lot more mellow because it was more fun to just soak in this time with each other and in this crazy place.

Note: I have a LOT of footage from the entire trip, and definitely some good concert footage. I’ll try to muster the motivation to edit that together, but video editing is one of my least favorite things to do.