As someone who took French for 6 years in grade school, I cannot resist the draw of a book set in Paris. And the premise of The Little Paris Bookshop really drew me in: a man, who is so intimately familiar with both books and the human condition that he is able to “prescribe” literary medicine to soothe people’s souls, sets out to try to mend his own broken heart. Some of the positive reviews that were already out for the book said it was great for book lovers. Hey, I’m a book lover! And I love France, let’s do this! 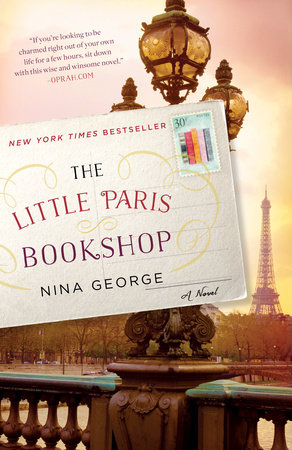 I am very sad to report that I really had a difficult time finishing this book and I would not recommend it. I have several reasons as to why I disliked this book (with a few spoilers in the elaborations):

Telling rather than showing: This was my biggest issue with this book. The prose reads like a story that a high schooler writes after his/her English teacher praises their writing as wonderfully mature for this age! There is a persistent issue of telling us how a character feels or thinks without taking the opportunity to SHOW the reader. Nina George is not bad at using her writing to describe things, but I frequently felt that I was not being taken on a journey; rather, I was being shown a slideshow of a journey instead. I rolled my eyes the hardest towards the end of the book, when she describes the air as glowing. It is the emotional resolution for our protagonist, Jean Perdu, and he is about to finally be at peace and heal completely from his broken heart, and she just tells us that the sunset is beautiful and the air glows. I honestly considered not finishing the book, with fewer than 10 pages left. The prose left so much to be desired, especially in comparison to The Tsar of Love and Techno, which you know I loved so much.

Poor character development: I felt nothing for any of these characters, not even our protagonist. Everyone was such a flat, one-dimensional character. My initial complaint was that the female characters were so dull, and I was mad that a female writer would have done this. BUT, upon some further reflection, I realized that all the characters are boring. Jean Perdu is just a sad middle-aged man, who is barely living his life because he was left by a lover that he was sharing with another man. The entire book is essentially about him learning both how to live and how to love again, but this seems to be signaled by the fact that his libido gets fired up for the first time in a long time. That’s not my issue with it, but I know nothing about him. I don’t care about him. I’m not invested in his growth as a character. I was not sad for him when he realized that the woman who broke his heart was dead and that he broke her heart by not being at her deathbed. (I didn’t feel sad for Manon either.) I was not happy for him when he finally found peace and love in his life again. I also didn’t like how Catherine is a character that we only know 3 things about: 1) She was dumped unceremoniously by a famous ex-husband, 2) She is now wholly dedicated to Jean Perdu, and 3) She has a hard time shaking off dreams when she wakes up. That’s the only thing we really know. Oh, and she cooks, I think? I don’t know. Everyone is so one-dimensional, as in they literally have one character trait that dictates what their actions and behavior will be. Sigh. This was almost as disappointing as the poor prose, but the poor prose elicited way more eye rolls from me than the boring characters.

Uninteresting story: Honestly, this was the most disappointing thing, although not my biggest issue. The premise is so good and ripe for excellent storytelling. But I didn’t get much indulging of my inner book lover at all. Again, the author tells us why books are special, but doesn’t SHOW US. Show me why you love books, don’t just tell me that books are wonderful. Cruising through France and just kind of existing… bickering… occasionally meeting people far more interesting than themselves (but still only in a one-dimensional way). There were many scenes that provided an opportunity for great story exposition and action… that disappointed in the end.

I really felt so let down by this novel, and to be truthful, I don’t plan to keep it on my shelf.