Last time on Spring Break 2016, we drove away from Las Vegas after indulging in gluttony and finally headed to Los Angeles for my first-ever visit to the City of Angels. We settled into our AirBnB studio in the scary-by-night Arts District and tried to catch up on rest knowing that we wouldn’t get many opportunities for rest over the rest of our trip.

This was also one of the few days that Megan and Don were rid of us. Maybe next time they’ll think twice before inviting us to the bachelor/ette parties right before the wedding AND to dine with them during their honeymoon at Disneyland right after the wedding. It was a lot of face time with us, possibly more than the cumulative time we’ve spent together during the rest of our friendship…

It rained all day on our first day in LA. This was pretty disappointing as I shook a fist at Adam Levine for teasing me with hot southern California days. From what I understand from my friends who live in the area, LA doesn’t handle rain very well. The wifi at our AirBnB studio wasn’t working, and when I contacted our really lovely host, she found out that all of downtown LA’s wifi had been knocked out by the rain. Welp, sorry data plan, I needed a lot of directions.

With our horchata latte

I love pie a lot

That also explained why I couldn’t check in on Belly at Pie Hole (review) the nearby pie shop that I was dying to visit as soon as I saw that it was near our studio. We gobbled down a little Shepherd’s Pie and a slice of Earl Grey pie, washed it down with a horchata latte, and braced ourselves for a taste of LA’s infamous freeway traffic as we prepared to head to…

Ben and I weren’t really sure about what the must-see attractions in LA were, but The Getty Center came up time and time again, so we decided to visit on our first day. It took us 40 minutes to get off an exit ramp that was 1.5 miles away from our destination, but that’s fine, it wasn’t as bad as I thought the traffic would be getting there. 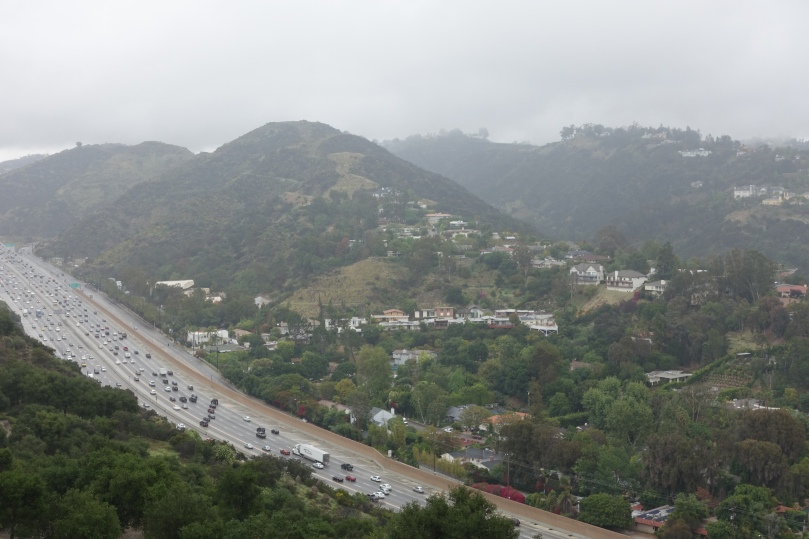 (I also may have had my only celebrity sighting trying to get off this exit ramp, as I maaaaaaay have seen Benny Fine driving past us? But, honestly, it could’ve just been a guy with dark curly hair and glasses…)

The Getty Center is one of the two buildings that comprise the J. Paul Getty Museum and it houses 19th- and 20th-century works of art across several multi-level buildings.

One of the most famous pieces at the Getty Center is Van Gogh’s Irises, which became the 10th most expensive painting in the world (account for inflation) when it was acquired by the Getty Center.

Honestly, though, as someone who is spoiled by the amazing collection at the Smithsonian (although I must mention that the Getty Center is free to visit!), I was most impressed by the architecture of this pretty spectacular building. Ben and I spent a lot of time walking around the grounds and the only guided tour we opted into was the architecture tour.

The Getty Center was designed by architect Richard Meier, who is known for featuring the color white really prominently in his buildings. I’m talking stark white buildings rising up.

The Getty Center is particularly impressive because it is built on two ridges that converge at a 22.5° angle that is featured in the floor tiling, which runs along two axes that meet at that same 22.5° angle. The design is meant to be harmonious with the natural elements and, of course, be aesthetically pleasing. The last thing Meier wanted to do was disrupt the natural beauty of the area, especially at the risk of incurring the wrath of the very wealthy residents whose estates are nearby. 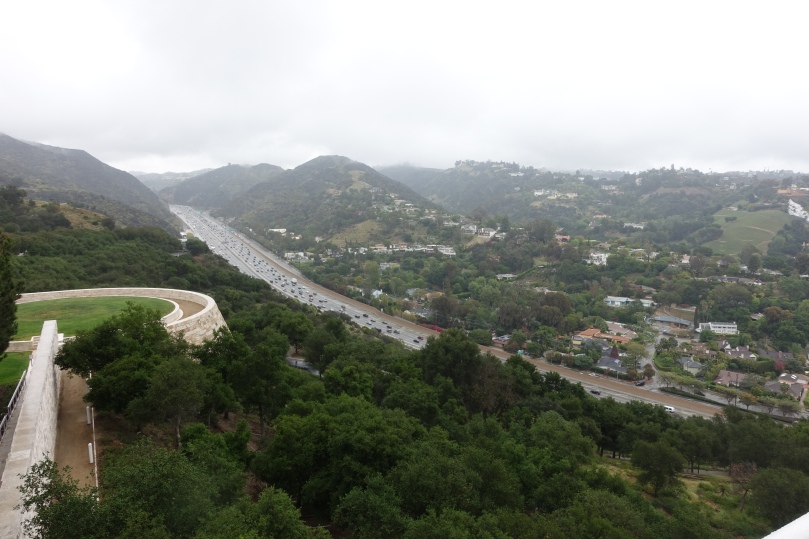 I loved learning about things like the irregularly shaped travertine that was not originally going to be sold by the quarry and the fossilized remains you could still see in them. The one pop of color in this all-white campus that is meant to evoke the lavender that grows in the area. The fact the Meier had favorite accent stones. How he designed “picture frames” with his building to frame photo-perfect moments.

(Bonus! The Getty Center is really great about providing umbrellas to guests, so there were all these matching beige umbrellas walking around.

After our architecture tour, we took a quick stroll through the Central Garden, which was really peaceful in the rain. 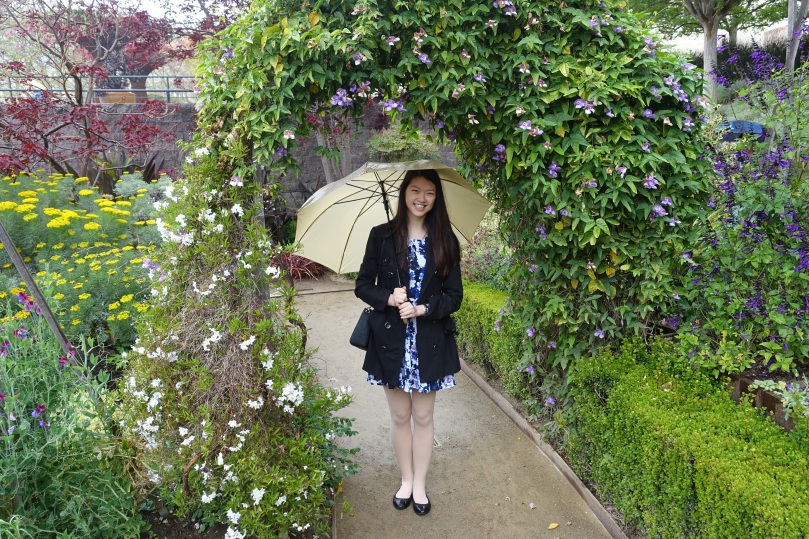 With all the photos, this post is getting a tad long, so I’ll pause here and tell you guys about how we rushed over the the Getty Villa after leaving the Getty Center so that we could use our parking ticket there for free parking. (And, of course, to enjoy the second part of the Getty Museum.)

We really enjoyed our time at the Getty Center. It’s a gorgeous museum and I’m sure it’s only more stunning in nice weather. I am really looking forward to visiting again and spending more time getting to know the museum better.

Have you visited the Getty Center before? What were your favorite things about it? I felt like I could spend a lot more time there and still learn new things about the museum, about J. Paul Getty, about the surrounding area, and of course, about the art collection it houses.

What are your favorite museums and galleries in LA? We visited the Getty Center, the Getty Villa, and stopped by LACMA