Thanks to Fox Searchlight Screenings, I was able to attend an early viewing of the latest comedy feature from the Duplass brothers, Table 19. 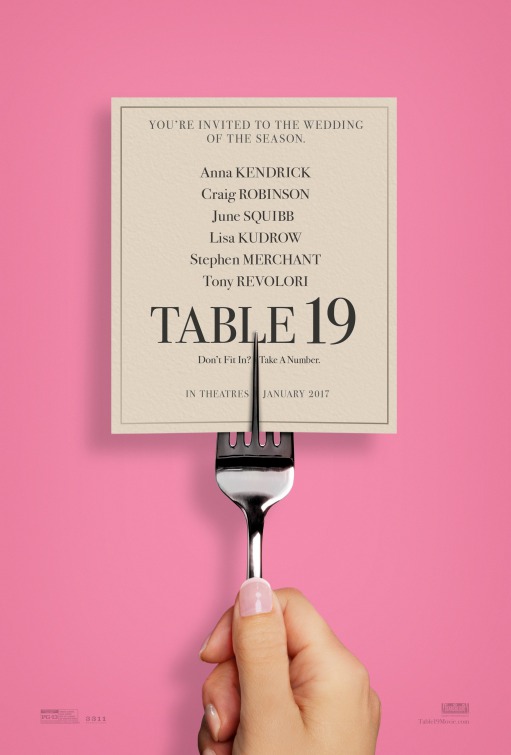 The premise of the movie is the Eloise (played by always-lovable Anna Kendrick) was the maid of honor for her friend’s wedding until her boyfriend, Teddy, who is the bride’s brother and the best man, dumps her via text. She drops out of the bridal party 2 months before the wedding and is relegated to Table 19, the rejects table where the obligatory invites who weren’t gracious enough to RSVP no are sitting. Her tablemates are Bina and Jerry Kepp (Lisa Kudrow and Craig Robinson), a married couple that owns a diner, Nanny Jo (June Squibb), the bride’s (and Eloise’s ex’s) elderly childhood nanny, Walter (Stephen Merchant), the cousin of the bride who got leave from his prison sentence to attend the wedding, and Renzo (Tony Revolori), the teenage boy skipping his junior prom in the hopes of having better luck with getting lucky at a wedding.

It’s a table of weirdos, yes. 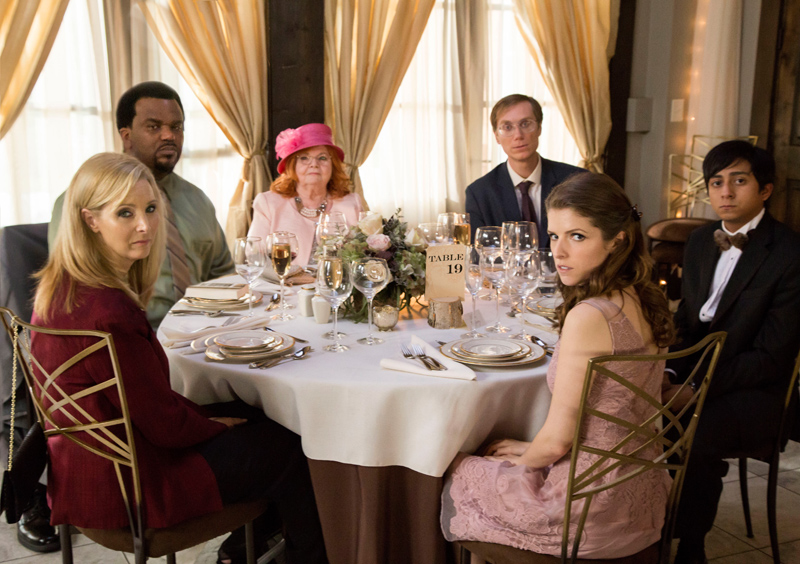 TL;DR I found the movie mildly charming and fairly funny, but ultimately I found it a little too indie-comedy in that the pacing and storytelling were strange and off. The audience is left scratching its head at a lot of what is happening, strange personalities aside, because not enough time is spent developing motivations and plot points and, instead, spent on quirkier sequences that don’t add as much to the story. I can’t highly recommend the movie, but it’s not a bad way to pass the time at the movies.

Table 19 is in theaters this weekend. (Discussion with spoilers after the trailer.)

The characters at Table 19 are… all right, if a little flat. Through the movie, we learn a few BIG REVEALS about each character… kind of:

OKAY so that last twist was supposed to be the big one and I am still left a little befuddled. There was a heartfelt monologue from Teddy (played by Wyatt Russell, son of Kurt Russell and Goldie Hawn?), but I didn’t buy it???

That was the big problem with this, it just threw in these bits that come from no where and don’t make sense. Suddenly, after parading his new girlfriend (who has replaced Eloise as the maid of honor, 2 months to the wedding) around in front of her, he’s telling her that he loved her and was too scared of letting her down anymore because she clearly didn’t want him to be a father?

The cute boy that Eloise met and danced with and kissed turned out to be… the groom at another wedding???

Jerry, after being suspicious for so long, accuses Bina of trying to sell the diner after feeling guilty about (jokingly?) accusing her of having ulterior motives for friending her ex-boyfriend and then is told by his wife that she WAS trying to have an affair and that he doesn’t love her? And he doesn’t deny that? (Also, they gave the flattest performances of the tablemates. Why does Lisa Kudrow play so many characters like this now? So many anti-Phoebes?)

What was Nanny Jo’s problem wherein she was so hung up on the bride and her brother? I think it was supposed to be just old lady-ness but what the heck?

The happy ending at the end… didn’t… feel that happy because we don’t really feel relief at seeing it? I don’t know, if you don’t like indie comedies… you won’t like this one. It has that same pacing, feel, storytelling… the same disjointed, disconnected feeling that some indie romantic comedic films tend to have?

I did like Renzo and Walter, they added much-needed levity to the film, great comedic timing and small facial expressions.