The year is half over and I can jubilantly check off one of my New Year’s resolutions:

I resolve to cosplay at a fan convention this year.

While I excitedly prepared for my first-ever con, a lot of folks asked me questions like:

The truth is, I didn’t have particularly good reasons for not attending a con before. One of the biggest prohibitors was that I didn’t think I belonged at a comics convention, specifically, because I don’t read comic books. But these conventions have evolved past the comics and have become much broader-interest fan gatherings that include nerds —like myself— who are not comic book readers.

In fact, as I was walking through the Artist Alley with Ben, I was lamenting how I felt a bit guilty walking through, because some of these artists were highly acclaimed comic artists whose work I was completely unfamiliar with and unappreciative of. As I was telling him how I didn’t know a single artist in the Artist Alley, and how overwhelming i was to be surrounded by so many vendors and artists and fans, I saw a corner table with something familiar on it…

… it was Dinosaur Comics and I was approaching Ryan North‘s table and I immediately started to panic. “Oh, do you know him? There’s no one there, do you want to go say hi?” Ben asked me. “NO we must leave now,” I whispered as I scurried away. Eventually, after walking a big lap around the Artist Alley, I summoned the courage to say hello and Ryan gave me a postcard! I’m a fan of his work on Dinosaur Comics and part of why I felt weird going up to him was that I wasn’t super interested in buying any of the merchandise he had? So I started feeling like I needed to buy something to say hi, but also that it cheapened the whole experience with the exchange of money… so I just said hi and he gave me a cute postcard to prove that I did it!

But let’s rewind a little bit for Day 1. 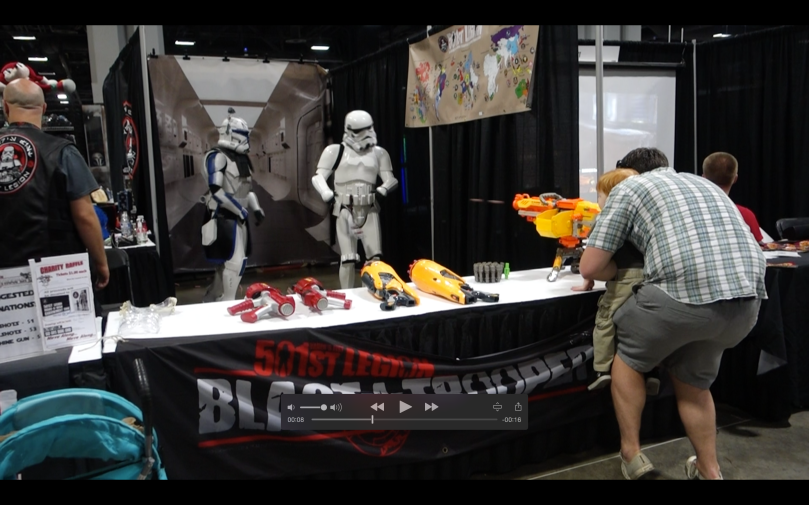 The morning started with cosplay prep! Since Friday is the chillest day of the convention, I went with my more casual Blue Dress Ariel look, which was pulled together by the Danielle Nicole bag I borrowed from my friend, Gretchen. I was recognized at a coffeeshop where Ben wanted to caffeinate (not knowing that Compass Coffee was offering free cold brews at the convention center that day – womp!) and the baristas seemed tickled to see the convention-goers in costume.

Day 1 was very low-key for us, and it was the day we were able to spend the most time in the Exhibit Hall, which worked out in our favor as it was the least crowded day. (In subsequent days, walking through the Exhibit Hall rows felt like pushing through molasses.)  It was a bit overwhelming but I loved every single second of it.

Aside from meeting Ryan North, I was able to see a lot of really great cosplayers. 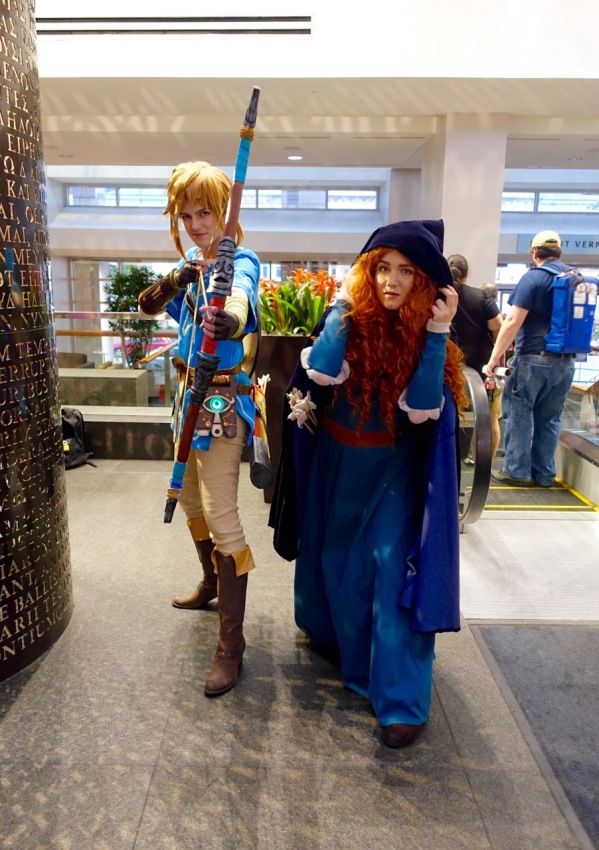 My dress was very popular at the convention, since it was a one-piece low-cost purchase from Hot Topic that really makes a look work, but I liked my added corset because:

That corset has become a great themed outfit investment, lemme tell ya!

We tried to attend a panel, but it quickly devolved into a big waste of our time. A few audience members in the front were talking more than the panelists, so the folks in the back could hear nothing, and it was a very pedantic and self-indulgent discussion on the part of both those talkative audience members and the panelists, so we dipped pretty quickly. I did enjoy that AwesomeCon had a FutureCon portion of the convention, and we were able to hear NASA scientists talk about how they are using lasers in space!

One of the big draws of AwesomeCon this year was the fact that Stan Lee was there! Stan the Man was booked all day for photos and autographs, but while I didn’t take advantage of those sessions, I was able to walk through the Stan Lee Museum. There were so many of his early comic sketches, movie props, memorabilia from other celebrities, and of course, so many Iron Man mech suits.

When the Exhibit Hall closed, we ambled over to the video game room before calling it a night with some ramen. I was more than thrilled to go back the next day with my higher-level cosplay!

I tried to hold back on photos to share but what would you like to see more of in the coming AwesomeCon recap posts? (And do you want to see more from the Stan Lee Museum because I have a LOT.)

Who are your favorite cosplays depicted? I had a real soft spot for that Ms. Frizzle!