I didn’t drink at all until I turned 21.

At this point, it’s difficult to articulate why. I know why I didn’t drink throughout most of my college (and of course through middle school and high school): I was very confident in my ability to have fun at a party without alcohol, I didn’t want to pay for alcohol, few of my friends drank, and I’ll be honest, I definitely had this sense of self-righteousness where I judged people for drinking, especially if they tended to drink in excess.

And let’s be real, it’s college, so they usually did.
(Also, I’m pretty embarrassing on a regular basis. I’m a bit frightened to know how much more embarrassing my behavior would be if I was under the influence of alcohol.) 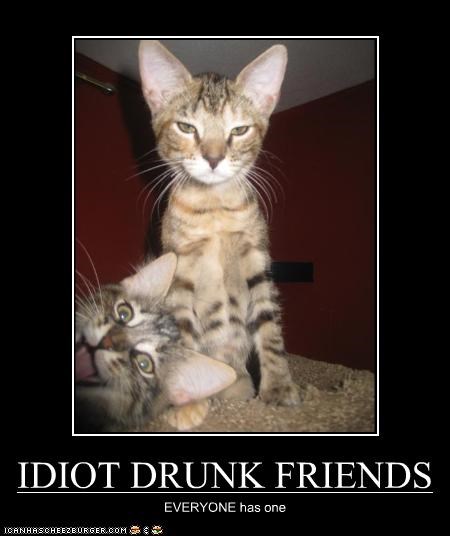 Combine the illegality of me drinking with my aversion to risks and disobeying the Man, and I would actually get pretty frustrated with people telling me to drink. Was it worth the risk for me to obtain a fake ID? Just to get into a bar and not drink? Because wasn’t I already a lot more extroverted sober than any of these friends were tipsy or drunk?
Not even a little bit.

Why I decided that I would start drinking when I was legally permitted to… is a different story. Trying to resolve the cognitive dissonance, I guess the illegal component is definitely gone. If a party is busted, I’m not going to be underage and therefore I cannot get in trouble for being present or even for drinking. (This was a huge fear of mine every time an RA or, worse, the cops knocked on the door of a party I was attending, even though I never drank at any of these parties.) Also, since I have such a late birthday, it means that almost all of my friends (in my class and up, I don’t party with no young’uns) have already turned 21. Whatever rebellious notions that most young adults have to stick it to the Man and, as studies show, result in serious binge drinking before the age of 21 was magically dissolved by everyone turning 21. Yes, a lot of my friends still get pretty shwasted, even if they’ve been 21+ for years now. (You know who you are! :P)

Regardless of the reasons why, I have started drinking a little now. My tolerance for alcohol isn’t piss-poor, as I thought it would be. I’m fair-skinned, prone to blushing, and my mom tends to glow after half a glass of wine, so I was sure I’d be a big ol’ red-faced Asian. Luckily for me, I’m not, and since the taste of alcohol still puts me off a lot, I have not come anywhere close to approaching my limit, so I don’t have “fun” stories about that either.

I have, however, noticed immediately the difference with which I am treated now that I drink at parties. The first party I noticed this with was a graduation party I attended in December. It was a lot of my friends that I didn’t really hang out with very much – my cooler Asian friends. I never really went to any parties with them before, but it was really nice to just sit and spend time with them outside of the events we had at school. It was also pretty innocent because we were at the grad’s house, with his parents and younger sister present But at some point, someone insisted that we start drinking the abundance of alcohol that was available. I didn’t have very much, but I noticed a difference in my interactions with my friends at the party and also subsequently after. I’ve been invited to a New Year’s Eve and Superbowl party since by these friends, and I am almost positive that I would not have been if I hadn’t been drinking with them a little before Christmas. I know that if I don’t go hang out with them in the near future, I probably will stop seeing these invites.

I hung out with some of my old hallmates last weekend after I made a reappearance into their lives and they were just like, “Wow we’ve never seen this side of you before!” I never hung out with them freshman year, and I wasn’t acting differently from how I usually act at parties (i.e. dancing before everyone is drunk and a general embarrassment to myself) (dishonor on my cow). I drank with these friends and they were very nice to me. I’m not sure if they were nice because I was drinking or because they were drinking… They never saw  “this” Starr getting low to Flo Rida (side note: I’m a big fan of getting low) and the East Side Boyz.

After these parties, I thought long and hard about why this is. It’s not like I’m acting particularly differently from how I do normally. Why is it that me having half a beer suddenly makes people so nice to me?

It occurred to me lat night that maybe I seemed standoffish or even… “threatening” by denying drinks. Did people perceive me as self-righteous and judge-y when I denied drinks? Probably. And I am guessing that people don’t like hanging out with uptight chicks who are judging them for letting loose and having fun. I say “threatening” only because I guess it’s a camaraderie thing; if someone isn’t partaking in this social bonding activity, it comes off almost as rude. By me not denying their gesture of kindness, I seem like less of a b*tch, for lack of other words. (I gave up swearing for Lent, so I will not be typing or uttering curse words.)

It’s interesting because I know that the only aspect of my behavior that has changed is my answer when people offer me a drink.

But that one little change has made quite a difference.

I guess this will make for a slightly different social experience for my last semester of college. I went to one of our local bars for the first time this past weekend. (Well, after happy hour, anyway.) It was fun seeing so many people I knew, and I get the feeling that those people will treat me a bit differently now that they’ve seen me as part of the bar scene.