I wanted to treat Ben (and myself) to a little something special for our recent trip to New York, so I booked us seats at Dominique Ansel’s after-hours, 7-course, dessert-only, 8-seat tasting menu, Unlimited Possibilities (U.P.).

I first learned of U.P. from my friend Michelle, who wrote an amazing write-up for the “First Memories Last Forever” menu that was available last year. The thought and execution of a menu that was designed around memorable “firsts” really drew me in, and I loved seeing how they used dessert to evoke these experiences and tell a story.

(I’m going to tell you right now that I was not impressed with the desserts. They were a lot more fun to look at than they were to eat. We left starving and unsatisfied.)

This season’s menu theme is “American Dreams“. (The theme changes every 6 months.) Each course is meant to evoke a different era of American dreams, beginning with the gold rush and ending with viral video. There is an additional wine pairing option, although we didn’t opt for that because we don’t drink very much so it didn’t seem worth it. We were, however, given a champagne flute of sparkling apple cider (one of my favorites!) to kick off the evening as they lowered the table from the ceiling. 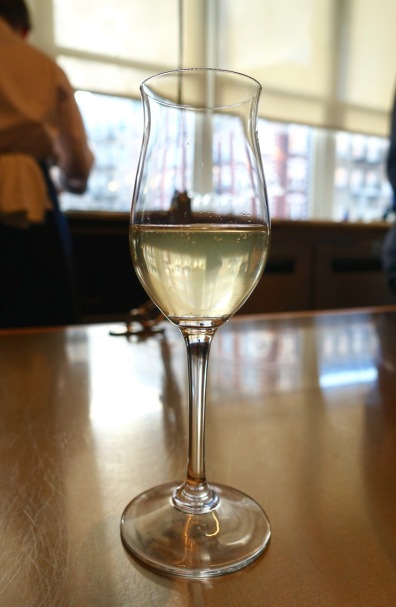 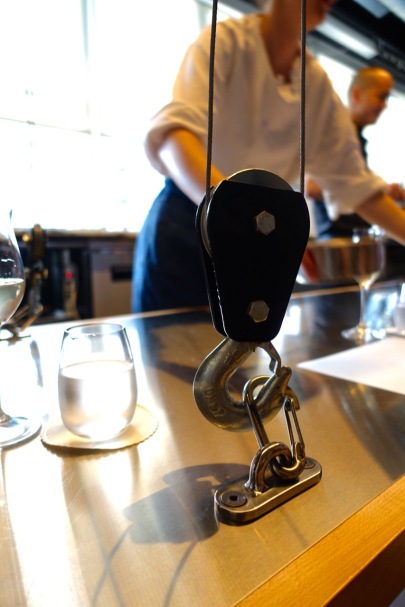 We were then served a savory amuse-bouche because it’s supposed to be an inverted tasting, so because all our courses were sweet, courses that would ordinarily be sweet were savory.

Our first course, Eureka!, was meant to evoke the gold rush. This was an interactive course, where we had to sift for gold nuggets. The “dirt” was coffee grounds were brewed during our meal and given to us at the end of our meal as a cold brew to enjoy. I didn’t realize that one of the nuggets was a sourdough bread pudding…? This was pretty fun to sieve through and the cold dessert was refreshing considering how hot it was outside. (A little messy, though, with the coffee grounds and lack of utensils to eat this with… Not exactly finger food!)

The second course, Carpe Diem, was meant to evoke the Roaring 20s. Think The Great Gatsby style partying. (In fact, I caught a little bit of Baz Luhrmann’s The Great Gatsby on TV the other day and saw exactly what inspired this course.) Juniper and huckleberry spritzer flowed over a little brioche. While this was pretty to watch them prepare, and I felt very relaxed as they explained this course (it was quiet, and cool, and they had such calming voices……..), I didn’t really enjoy the taste of this course. It wasn’t very sweet, quite tart from the variety of fruit and floral flavors, and I didn’t like the spongy texture.

Course 3 was White Picket Fence, hearkening to the 50s ideals of the perfect home life. Each pair had a little house opened up before their eyes like a pop-up book, and as I looked around I noticed that we all had something different in our front yards. Kids, a dog, or in our case, just a car. This dessert had 2 parts that, to be honest, confused me a lot? (And still a little salty that we couldn’t even have dog. I don’t even like cars that much…) 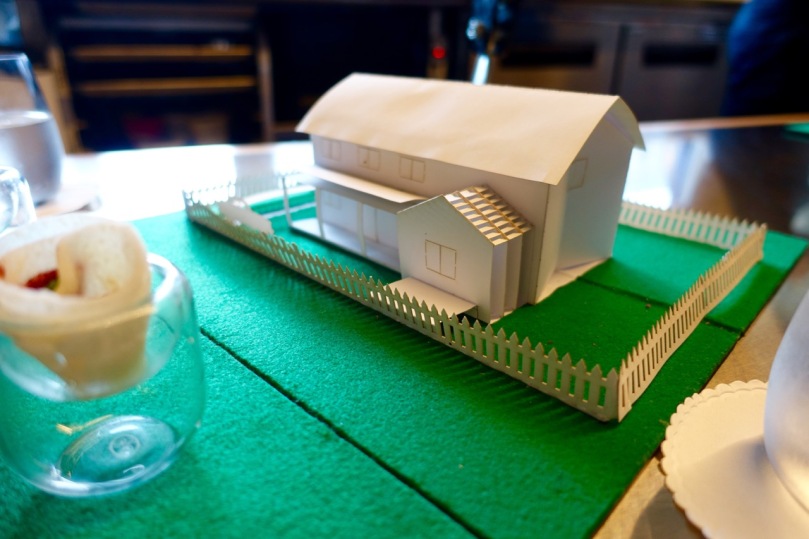 Next up, for the 60s, was Peace, a chamomile panna cotta with a splash of milk over top and a red dot droppered on. When an orange rind was placed in the middle, the red dot spread into a psychadelic pattern across the dish. This was not as good as I was hoping it’d be, because the panna cotta didn’t seem set up enough, so the consistency just felt very wrong. And I couldn’t taste anything but the milk. (Related: I really don’t like the taste of milk.) 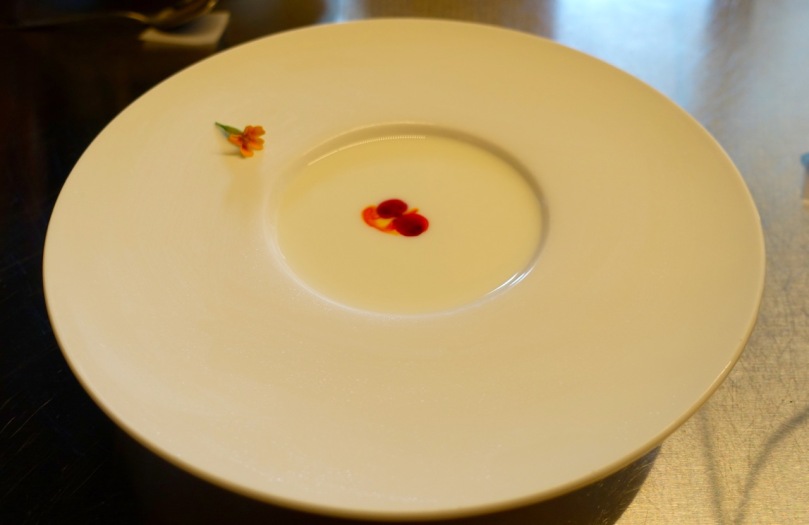 After the 60s, we had a savory (I keep typing “savoury”…) palate cleanser in place of a sweet sorbet that would be served alongside a more traditional meal. It was a hot mushroom broth that, honestly, was one of my favorite things I tasted that evening, to give you an idea of what I thought of the desserts. It was warm and umami and savory and what I was craving after a lot of disappointing and barely-sweet desserts.

Then it was on to Wall Street in all its Michael Douglas Gordon Gecko glory. This was one of the more traditional desserts: a little crispy potato “cigar” filled with chocolate cream and served in a smoky domed glass. But even as a more familiar dessert, the flavors in this were all very subtle.

Onwards to the age of technology with the Tech Boom. This was the course I was most excited for because 1) a computer that spits out waffles and 2) WAFFLES. Unfortunately, the little computer literally malfunctioned as soon as it got to me, after working flawlessly for the 6 people before me, and then malfunctioned again for Ben. We were all given real floppy disks with the first name of a different tech innovator, asked to put it into this old-school computer, and out popped a little sassafrass waffle that they then topped with ice cream and celery maple syrup. I really don’t like sassafrass and celery is unnecessary in maple syrup, so I only really ate the ice cream. This actually turned out to be one of my least favorite courses because not only did I not like the overpowering sassafrass flavor of the waffle (finally, a strong flavor…), but it was dry and hard and a little overcooked. I know it wasn’t a Belgian waffle, but still, this was supremely disappointing.

Finally, coming to the present, we had #GoingViral, which featured the adorable Sherman the Sheep, who was made of manchego cheese and surrounded by different flavored “filters” that you could spin around him as you chose your favorite. This course, as our last course, was meant to evoke a wine-and-cheese finisher, which I thought was creative. Although I don’t like cheese, I did enjoy nomming on poor little Sherman and I liked the flavors of the filters. 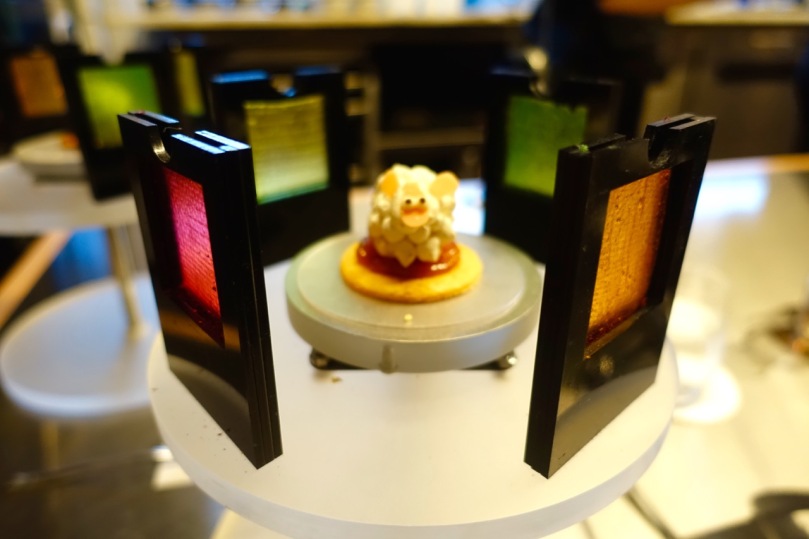 As a parting gift, we were given A Wish, which Ben and I didn’t understand and maybe accidentally broke before we were supposed to do the break-the-wishbone activity. (Oops, sorry Ben, when I saw we broke it I mean that I broke it alone.) It was just a little milk chocolate wishbone that was served with tea (or coffee, for java drinkers). It was just chocolate, I can’t say anything more about it. 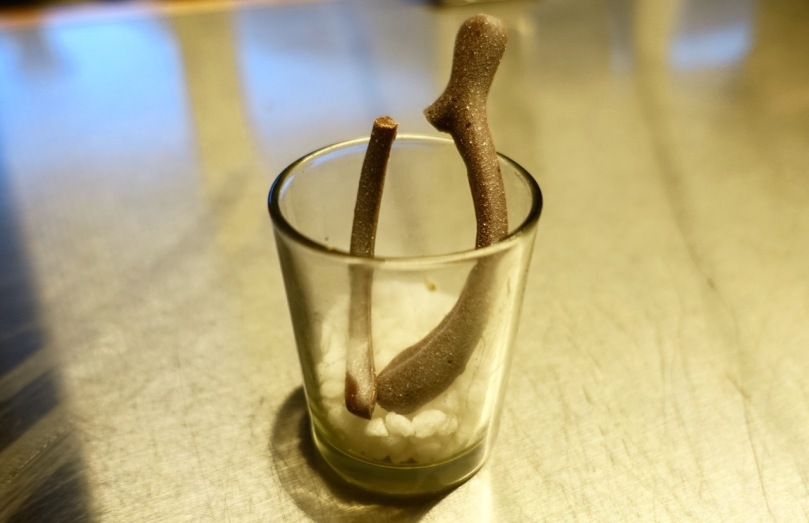 As we walked out, we were given a silver balloon with a little fortune inside and the bottle of cold brew brewed from the coffee grounds from our first course. It was very cute and we enjoyed the cold brew as we said goodbye to our hotel room and to New York City the next morning. 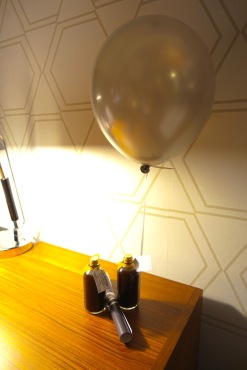 I’m disappointed by how unsatisfied I was by this, but it was still a really nice experience! The service was impeccable, the ideas were very creative, and the experience was overall really lovely and worth going through. I just wish that the desserts themselves tasted better, especially considering the price.

The American Dreams menu has ended, but I am looking forward to seeing what the kitchen dreams up for their next tasting menu, although I’m not so eager to try it out.

Have you experienced a tasting menu before?
What are your favorite dessert places in New York? (Or anywhere else?) I held off on a lot of other dessert spots during our trip because I was so looking forward to getting my dessert fill here and I did feel very let down.

Also, have a great Labor Day weekend! What are your plans? And can you believe it’s September already? There’s a small chance I change up my posting schedule soon, so please let me know if you like/dislike the upcoming shift.